If you want to get to know the painter better or if you are visiting Zaragoza, you can take the guide De Goya: “the origin of a genius”. In this article you will know the places that the new route of Goya in Zaragoza will visit: “The origin of the genius” and discover the city at the same time as the painter’s work.

The visit to see the steps of Goya will take place twice a month, always on Saturdays at 11.00 a.m., as it will alternate with the Goya Walk, designed to discover his work.

Points of interest in which to discover the work of the brilliant painter:

Monument and cenotaph of Goya in the Plaza del Pilar 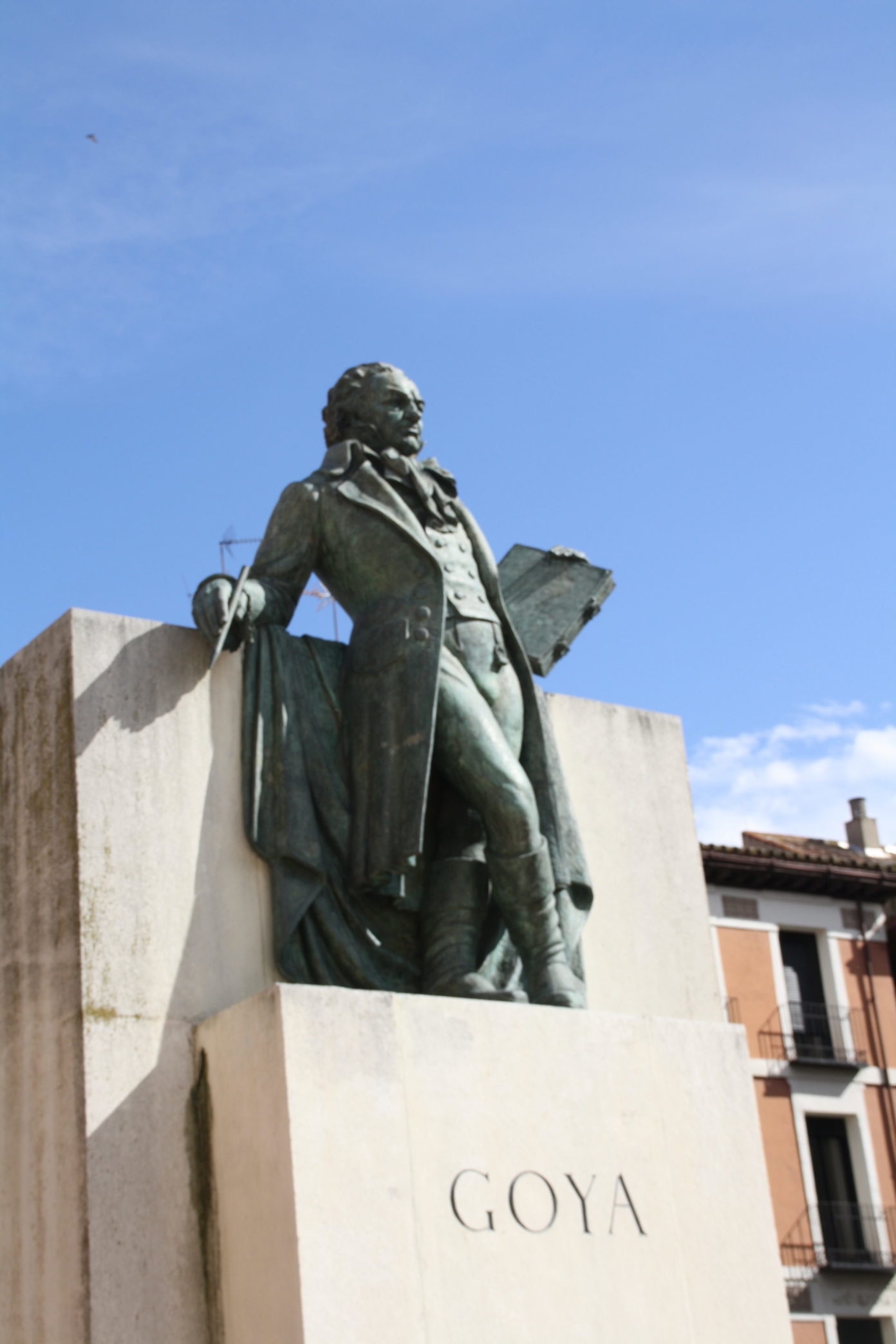 Monument and cenotaph of Goya in Zaragoza
In front of the statue of the painter we will begin by recalling his childhood and youth, his early training with José Luzán, his two failures in the competitions of the Academy of San Fernando in Madrid, his stay in Italy and his first important works in Zaragoza. We will also tell the interesting and curious story of the cenotaph that stood over the painter’s tomb in Bordeaux.

At the height of the current Calle Alfonso I nº 7-11 and 13-15, although some six metres further inland from the current façade, there was one of the houses in which Goya and his family lived, in the old Calle del Trenque nº 12. Both the building and the street disappeared when the new Calle Alfonso was laid out in 1865. Here we will explain what the city was like in the middle of the 18th century, what Zaragoza was like when Goya lived there, what its urban planning was like and also what its inhabitants lived on.

Here stood the family home of the Goya family from the 17th century until they lost it due to debts. From then on, the family began to move from 1757 to 1775, passing through ten different homes. The house where Goya spent his childhood was demolished in 1947. We will point out the place where it stood and we will see what the houses of the time were like, both inside and out.

Coso in front of Alfonso I Street

The Coso was the most important street in the city, the widest, the busiest, where the most elegant carriages passed and where the best houses were built.
Goya stayed in the building on the corner between the Coso and Calle Alfonso when he came to paint the dome Regina Martyrum in the Pilar between 1780 and 1781. And almost next door was the house where his close friend Martín Zapater lived. At this stop we will remember the close friendship that united them and that we can still see in the letters that Goya wrote to him from Madrid and that are still preserved. Thanks to these letters we will learn of his love of hunting, bullfighting, music, nougat and chocolate.

Plaza de España next to the Bank of Spain.

Next to the place where the Casa de Comedias used to stand, we will talk about the city’s festivals and the entertainment that was most fashionable at the time, such as the theatre and bullfighting.
We will not forget the terrible fire at the Coliseo de Comedias in 1778 which shocked the city and which Goya heard about when he was already in Madrid.
We will also refer to the church of San Gil, the Goya family parish church for years.

Coso on the corner of Calle Heroísmo

If there is an area of Zaragoza that could be called “Goya’s neighbourhood”, it would be the area of the lower Coso. A triangle delimited by the Coso, Heroísmo Street and San Miguel Square. Francisco lived in this area from the age of 16 to 29 in six different homes.
We will tell how it was and how it changed from then until today, marked by the ravages of the First Siege in 1808, especially by the explosion of the gunpowder warehouse that devastated the area.

La Cadena Street on the corner of Antonio Agustín Street

This stop is next to where one of Goya’s family homes once stood. This is where he lived when he painted the vault of the Coreto del Pilar, which was his first important commission and his first success. We will also learn about the society of the time, marked by profound inequalities, daily life in the city and the role of women in the 18th century.

This is the only house in which Goya lived that has survived to the present day, although it has been renovated. It was from this house that Francisco left for Italy in 1769 to complete his training.

It was in the church of San Miguel that the painter’s parents and his brother Tomás celebrated their marriage. Antonio, the first son of Francisco and Josefa Bayeu, was baptised there. And his father, José, was buried in its main nave in 1781.