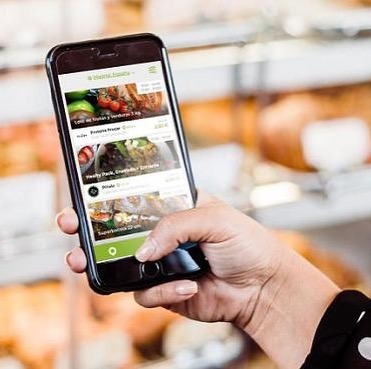 This initiative is born in the Aragonese capital and aims to support local commerce, help the environment and, unlike other similar proposals, help vulnerable families.

Do you want to give a second chance to food that is about to be thrown away and could still be consumed? With Encantado de Comerte you can do it. This is the first Spanish app that fights against food waste and has already won the Aragón 2020 Social Entrepreneurship Award.

With the idea that the Aragonese Enrique de Miguel and Adrián Espinosa and the Madrid-born Gabriel Ramas had, since 2018 it has been possible to buy perishable products from small shops such as greengrocers, fishmongers, butchers, bakeries or menus from the catering sector in batch format at reduced prices of up to 70% of their original value and thus help to prevent them from going to waste, helping local businesses to recover some of their investment and helping the environment.

“We help so that no more losses occur, so that the environment does not suffer any more, we support local businesses in their losses, so that they can recover some of their investment. We focus a lot on the local aspect and on the relationship with the family economy”, explains Irene del Amo, Marketing and Business Development at Encantado de Comerte.

In addition to this, there is a social aspect, as, aligned with the SDGs and collaborating with NGOs, they help vulnerable families to obtain non-perishable foodstuffs.

How does Encantado de Comerte work? The food that is put on sale is that which shops have not been able to sell during the day, often due to oversupply. “They are products in perfect condition for consumption, and in no case should they be confused with products that are in poor condition or expired”, adds Irene.

The average price of a batch, which never details its exact contents, is between 2.50 and 3.50 euros and the minimum discount is 50%. “The companies don’t say what food their lot contains, but if it is a greengrocer’s shop, they do indicate that there are four kilos of organic fruit and vegetables, for example,” comments Irene.

The lots are automatically put on sale in the early hours of the morning and can be purchased throughout the day until all the available lots have been “rescued”, a term used by Encantado de Comerte to mean that they are sold out. The app user can go and pick them up at the establishment at the times set by each shop. “It’s usually at closing time, for example, in the case of a greengrocer’s around 7.30 or 8 o’clock”, says Irene.

Since its launch, Encantado de Comerte has saved 40 tonnes of food in Zaragoza, Madrid (including Fuenlabrada, Getafe and Móstoles), Logroño, Santiago de Compostela and Vitoria. More than 50,000 people have already downloaded the app and 250 businesses have collaborated.

Encantado de Comerte is an ally of NGOs and helps vulnerable families with their project to obtain non-perishable food.

“We work in collaboration with NGOs to help these families in a situation of food insecurity so that they can have access to a varied and complete diet, which is the most difficult thing to provide through Food Banks,” Irene explains. In fact, the system is not stigmatising at all and privacy is maintained at all times when people go to the establishments to pick up their lots.

In Zaragoza, they collaborate with NGOs such as Cáritas and neighbourhood associations such as Cívitas. In Madrid, other NGOs such as CEA(R) or Fundación Tengo Hogar have already joined the initiative.

The challenge: reaching other points in the chain

In Spain, 7.7 tonnes of food are wasted every year: 42% in households. At Encantado de Comerte they are currently focusing on supporting and reducing waste at another part of the chain, at the retail point of sale. But they have a challenge: to reduce waste at other stages of the product life cycle where waste is even higher, such as at the production stage or at the household consumption stage.

“We are now focused on that part of the retail trade but we believe that the household waste part is very important and is a very educational issue. That’s why we have to work on collaborating with universities, families or neighbourhood communities to give courses and training, tips on how not to waste”, Irene specifies.

Facebook
Twitter
Pinterest
WhatsApp
Email
Suscríbete a nuestro boletín
Artículo anteriorJulio Ramón: “The objective of the IAACC is being achieved, to show contemporary art in its context”
Artículo siguienteThe Rodellar Valley presents itself at FITUR as the heart of Guara