The Department of Economy, Planning and Employment, through INAEM, launches Pro-Digital. This is a new comprehensive training and employment program to qualify young graduates or graduates in digital skills, new technologies, robotics and Industry 4.0, and their subsequent employment or access to self-employment. 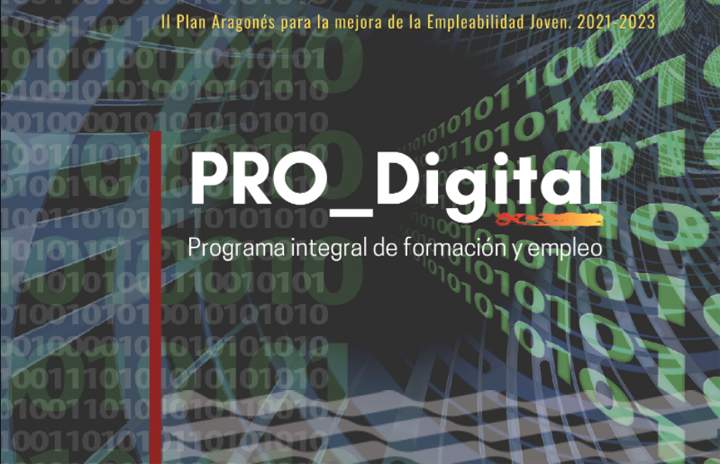 The Official Gazette of Aragon (BOA) has published today the regulatory bases for the granting of subsidies included in this new program, which is endowed with five million euros and is part of the current Aragonese Plan for the Improvement of Youth Employability (PAMEJ).

The subsidies included in this program will finance both the cost of the training -to be paid by the companies themselves or by training centers- and the prospecting tasks of possible hiring entities, as well as the quality hiring of young full-time workers for a period of at least two years in a job related to the training received, or the creation of their own job in the self-employment modality.

The objective of Pro-Digital is to promote the training of young people in the digital field, to encourage the prospecting of companies that hire these trained people and to promote their employment through the hiring of employees, entrepreneurship or their access to worker cooperatives or labor companies as working partners.

To be eligible, the contracts must be full-time, permanent or with a minimum duration of two years, represent a net increase in the company’s workforce and be aimed at performing jobs in which the training received through the program is applied. In order to ensure that these are quality contracts, in addition to establishing conditions regarding their duration, a minimum remuneration is established according to the type of degree the contract has and the amount of the aid will be increased if they are indefinite-term contracts from the beginning.

Both in the subsidies for the hiring of employees and for self-employment, the amounts will be increased by 5% in the case that the women hired are women or that the work centers are located in towns of less than 5,000 inhabitants, and by 25% if women victims of gender violence are hired.

The participants in the program, in addition to being 35 years of age or younger at the time of starting the training process, must be registered as unemployed or in improvement of employment in the INAEM, be registered in a municipality of the Autonomous Community, and have any of the following degrees or professional accreditations: degree, diploma or university degree, technical degree in an intermediate or higher level training cycle, certificate of professionalism of level 2 or 3, or other degrees officially recognized as equivalent.

The training received by the participants must be included in the Catalogue of Training Specialties, will be theoretical-practical and will be given in classroom mode, with a maximum of 25 students per training action. Its duration may be between 100 and 360 hours, except in the case of training to obtain a degree or professional qualification necessary for the exercise of a specific labor or professional activity, which must comply with the duration established in the official catalog.

These are the best oils from Southern Aragon. Spain