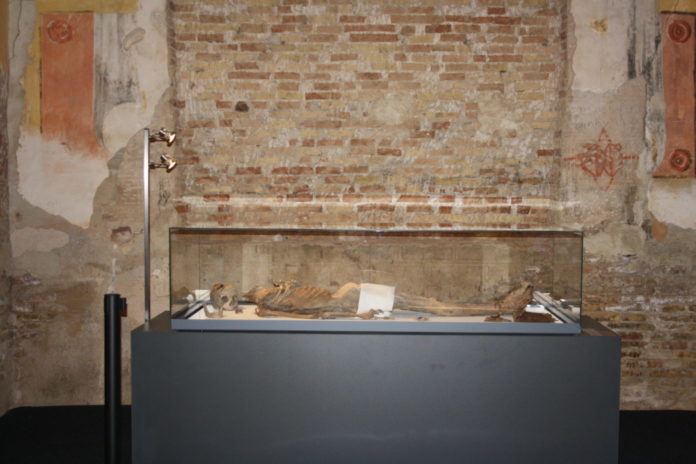 The museum of the mummies of Quinto (Aragon) exhibits a set of 15 mummified bodies in a natural way, exposed where they were buried and exhumed. The mummies are accompanied by decorative elements, complements of the funeral rite and all this in a deconsecrated Mudejar church that is pure history.

Narcisa died at the age of 67 in Quinto de Ebro. She was given the habit of Santa Teresa and was buried in the old church of the Assumption or better known as El Piquete, a beautiful Mudejar church from the beginning of the 15th century that crowns a hill in this municipality of Zaragoza. Narcisa was a tiny woman, 1.37 meters tall, who married the mayor of the village. She may have lived between the 18th and 19th centuries and in her long life she had ten children, although only five of them reached adulthood, two single men and three women who married men from the municipality, giving rise to very frequent surnames in the family tree of the current inhabitants of Quinto. This is all that is known about her. 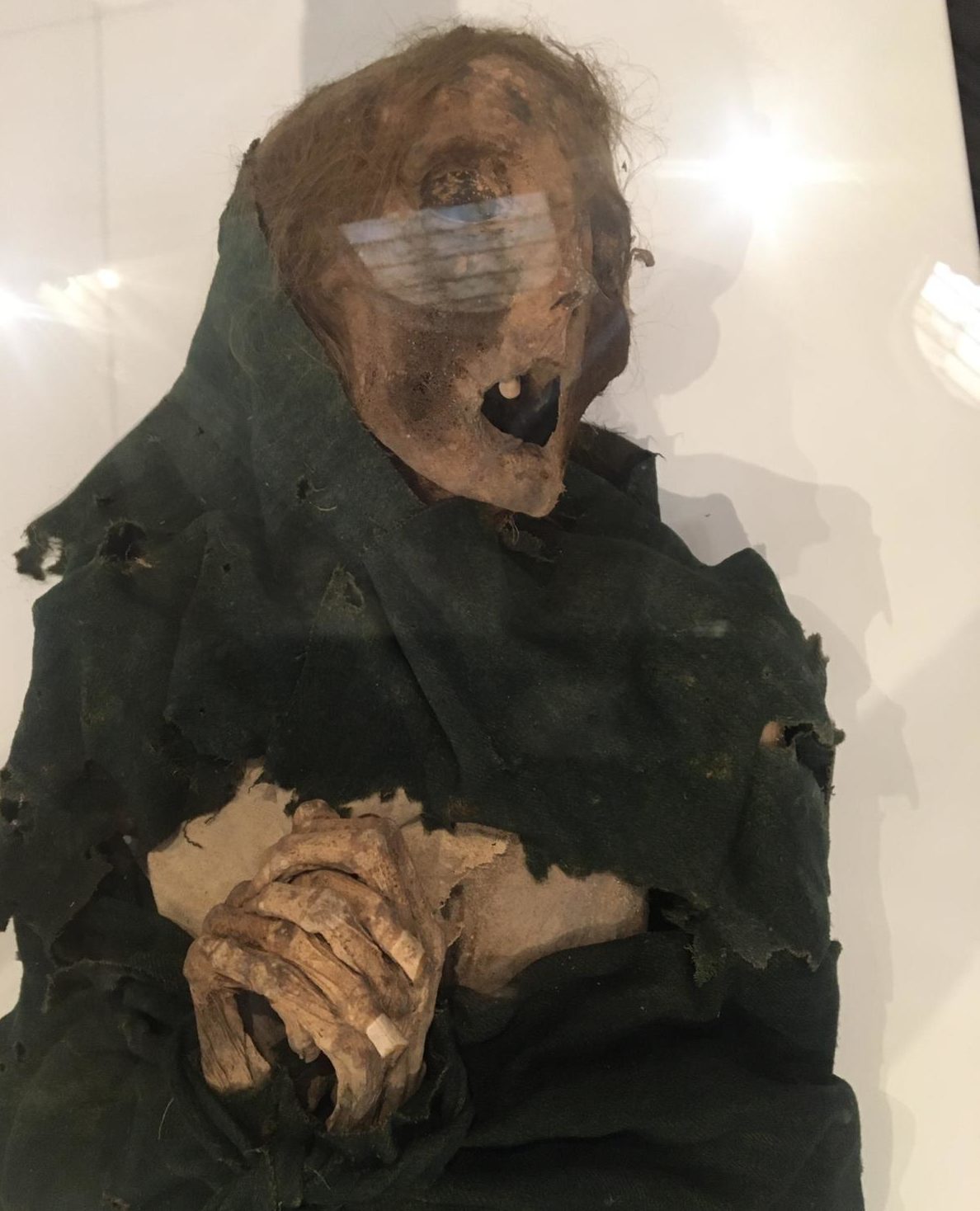 Granny Narcisa, as she is known to many in Quinto de Ebro, is one of the 15 mummies found in the archaeological excavation between 2011 and 2017 under the burials and coffins found in the most superficial layer of the ancient church of the Assumption of Quinto de Ebro. Now, it gathers the only Museum of Mummies in Spain that currently presents in an expositive way a set of mummified bodies in a natural way. The museum opened to the public in 2018 after years of remodeling has tried to recompose the history and cultural and human heritage of Quinto through the remains of those who were neighbors or visitors to the municipality from the respect and scientific rigor. 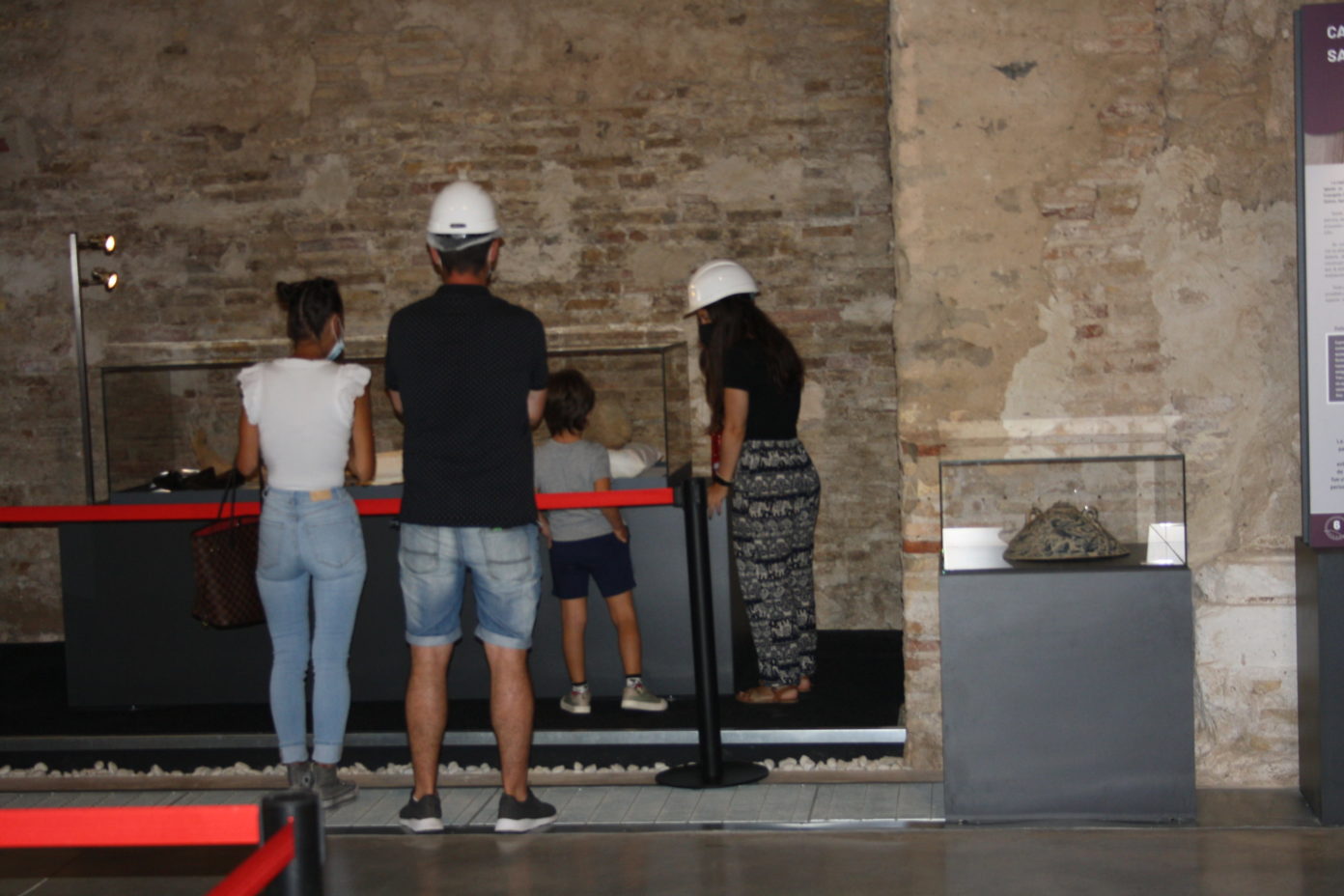 The bodies, eight children and seven adults, date from the eighteenth and early nineteenth centuries and can be seen where they were buried and later exhumed. This is what makes this museum unique in Spain and of national and international interest. Because it is not the only one in the national territory where a mummy can be observed, but no other shows the bodies where they were buried and then exhumed and whose mummification lacks artificial means. This compendium makes it so special.

Other places in the world such as Palermo (Italy) or Guanajuato (Mexico) have a museum of naturally mummified bodies, but what also makes the Quinto museum stand out is the good state of preservation not only of the individuals, but also of their original clothing, which has made it possible to exhibit them dressed as they were found. “This is due to the conditions of constant temperature and humidity in the building and the aridity of the subsoil of the soil that we have in this area. It is very important that the soil is very dry and that the bodies already had a certain degree of dehydration, people who were already quite ill and deteriorated,” says Encarna, museum guide. 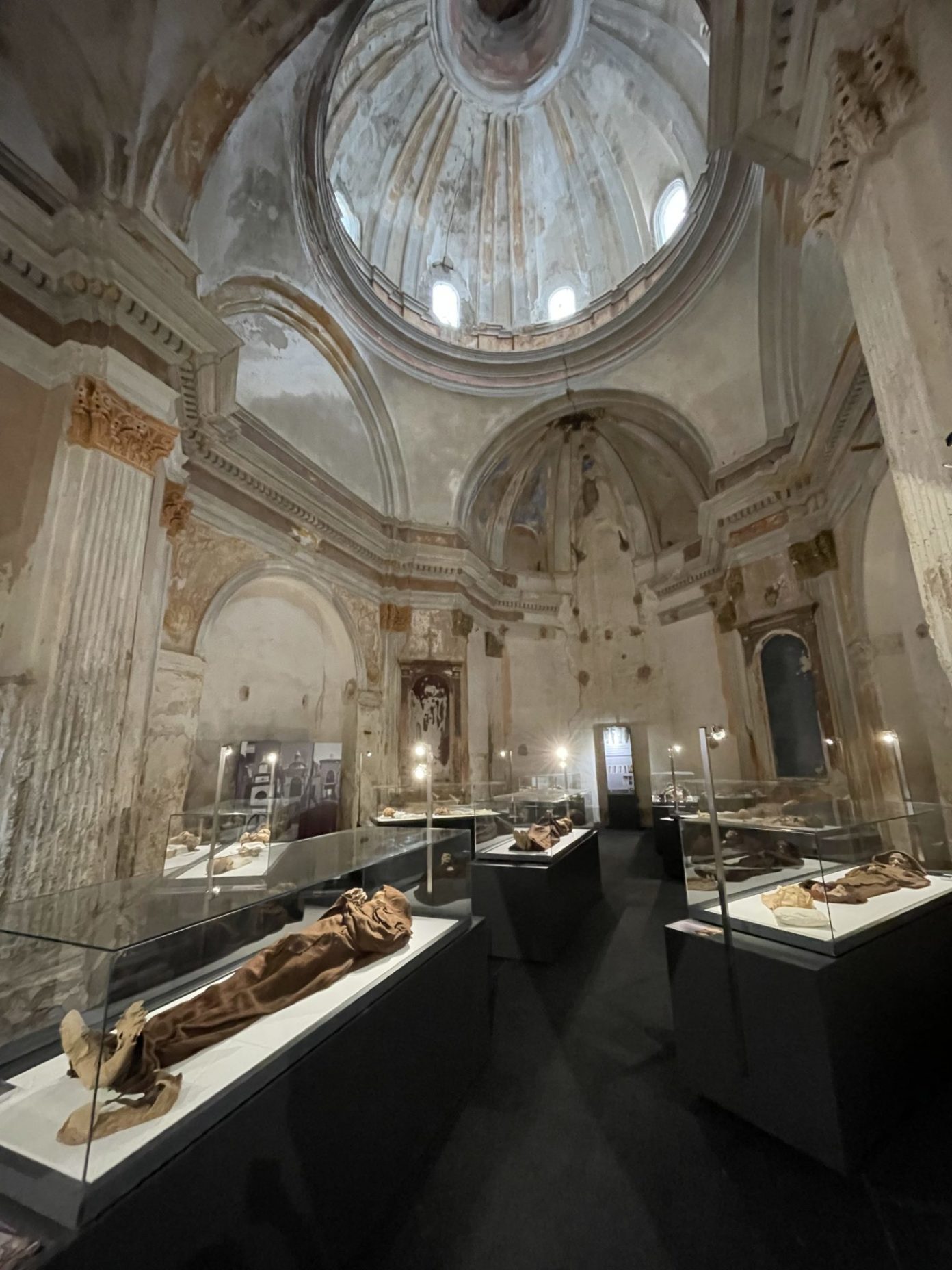 In total, 1,085 burials were exhumed from the Piquete excavations, but only 15 of the individuals were found naturally mummified. What is the reason for this mystery? Nothing more than science. All of them were located in more or less the same area, with similar conditions of humidity, temperature and soil aridity. Natural mummification has allowed the exposed bodies to be preserved as they died, preserving hair, nails, eyelashes, skin and even some organs such as the heart or lungs. 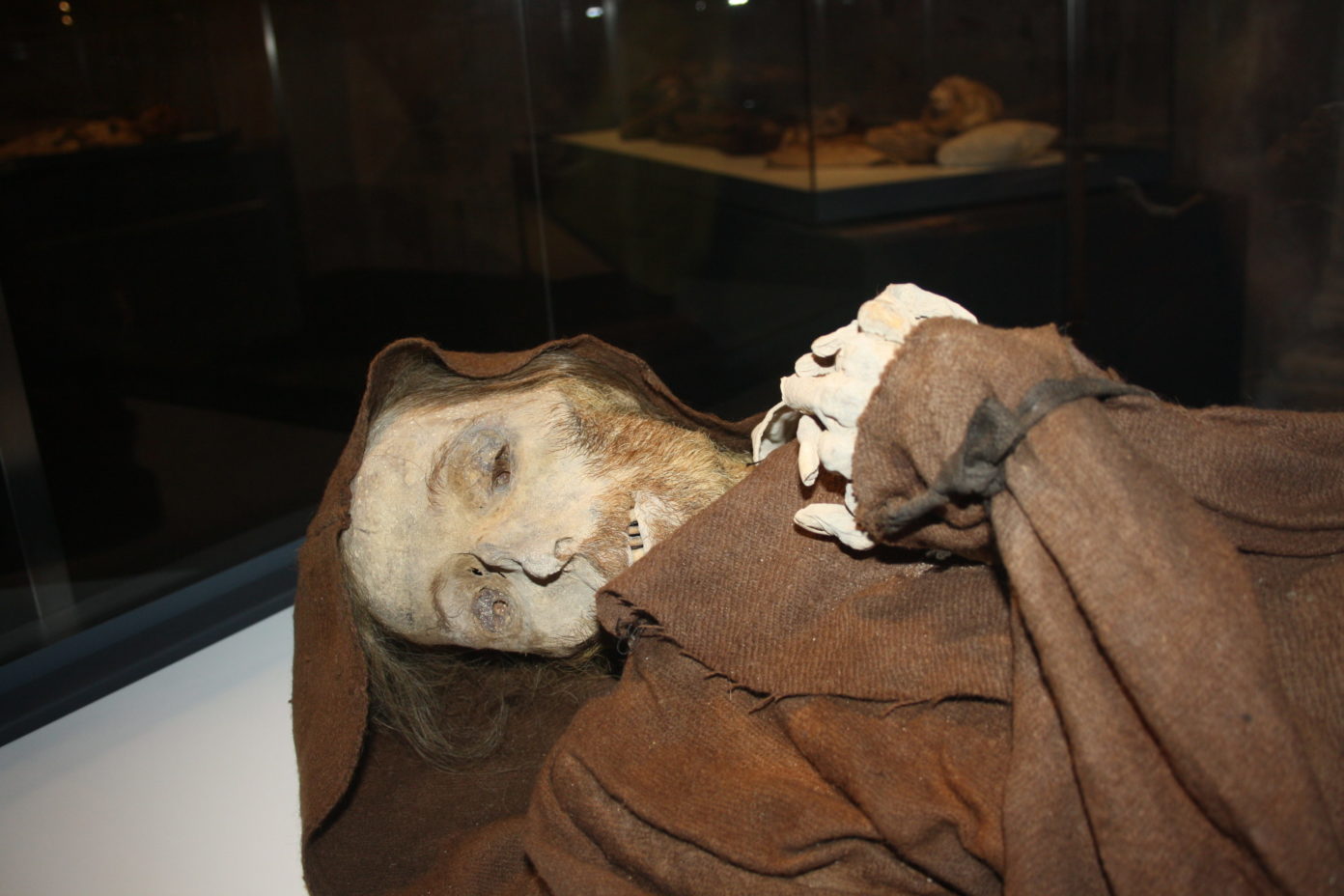 In addition to the almost 1,100 bodies, polychrome coffins, rosaries, bracelets, buttons, needles, crucifixes, bulls, crucifixes, cruets, coins and an endless number of decorative elements and complements of the funeral rite were found in the graves. Even two mummified mice appeared inside one of the bodies.

To avoid the morbid halo of mystery that has always surrounded the mummies, and to replace fear, ignorance and controversy with cultural interest was one of the maxims by which the Museum of the Mummies of Quinto has been governed. That is why the discourse of the Piquete has been based on respect for individuals and scientific rigor. From the beginning they were clear that they had to investigate with the latest technologies all the findings of the subsoil. In 2015, the mummies were analyzed at the Royo Villanova Hospital in Zaragoza, where they were subjected to a thorough study, using technologies such as computed tomography (CT), analyses that have allowed them to learn more about the individuals found. 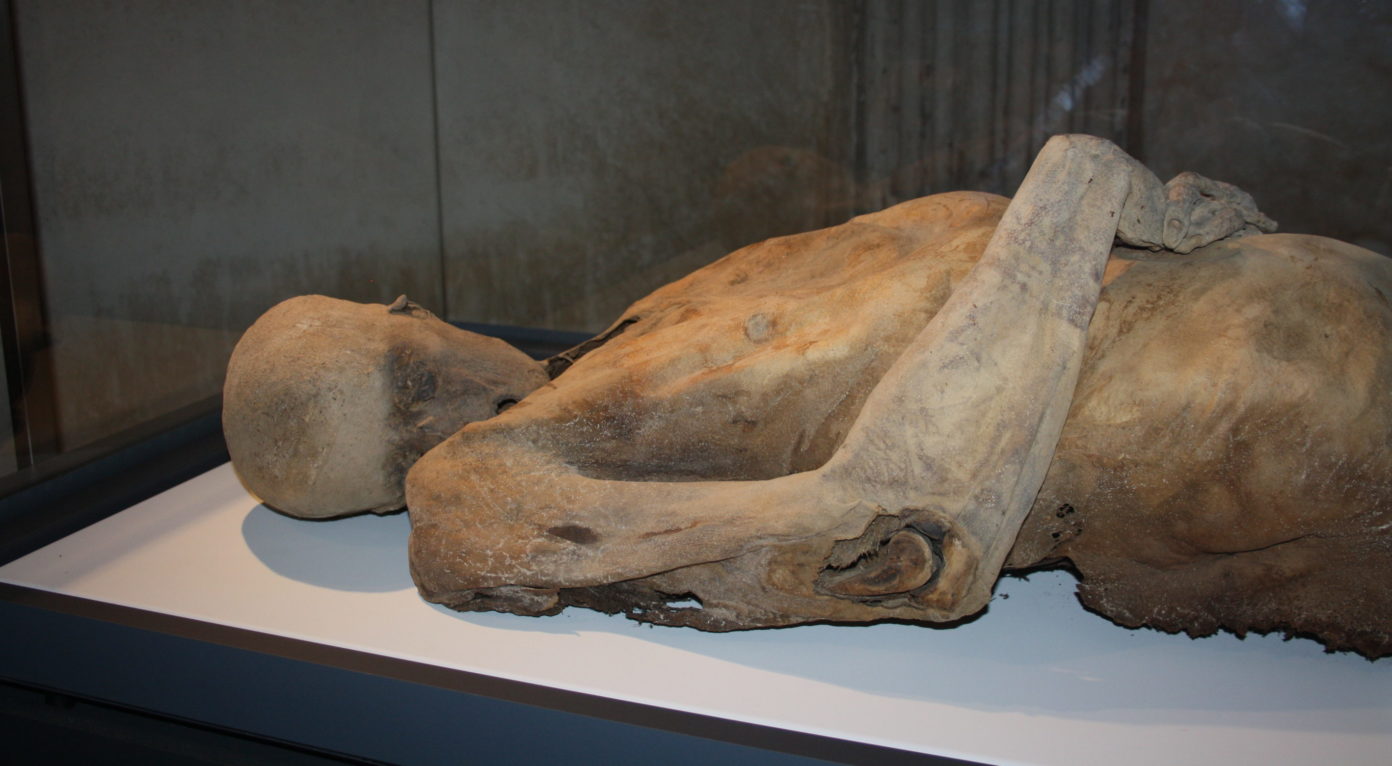 Although it has not been possible to determine exactly the cause of death of all of them, valuable information has been obtained about the bodies that has allowed us to know what their lives were like, what their bodies were like, where they came from, what they ate, at what age they died, what illnesses they may have had, and even to be able to intuit the cause of death.

For example, the study of one of them has revealed that she was a wealthy 35-year-old woman who arrived in Quinto from Alcañiz with a uterine and rectal prolapse, an intestinal obstruction and a hemorrhage that could have caused her death. She probably traveled to the municipality to a spa that was in Quinto at the time to cure her constipation problems. This is some of the documented data and of the many stories that are explained during the guided tour. All these stories are documented by Antonio Jardiel, director of historical contents of the museum, who has compiled all the information about the town, the church, the civil war and the mummies. Mercedes González, director of the Madrid-based Institute of Scientific Studies on Mummies (IECIM) is the scientific director of the museum, and the mayor of Quinto, Jesús Morales, is the coordinator. 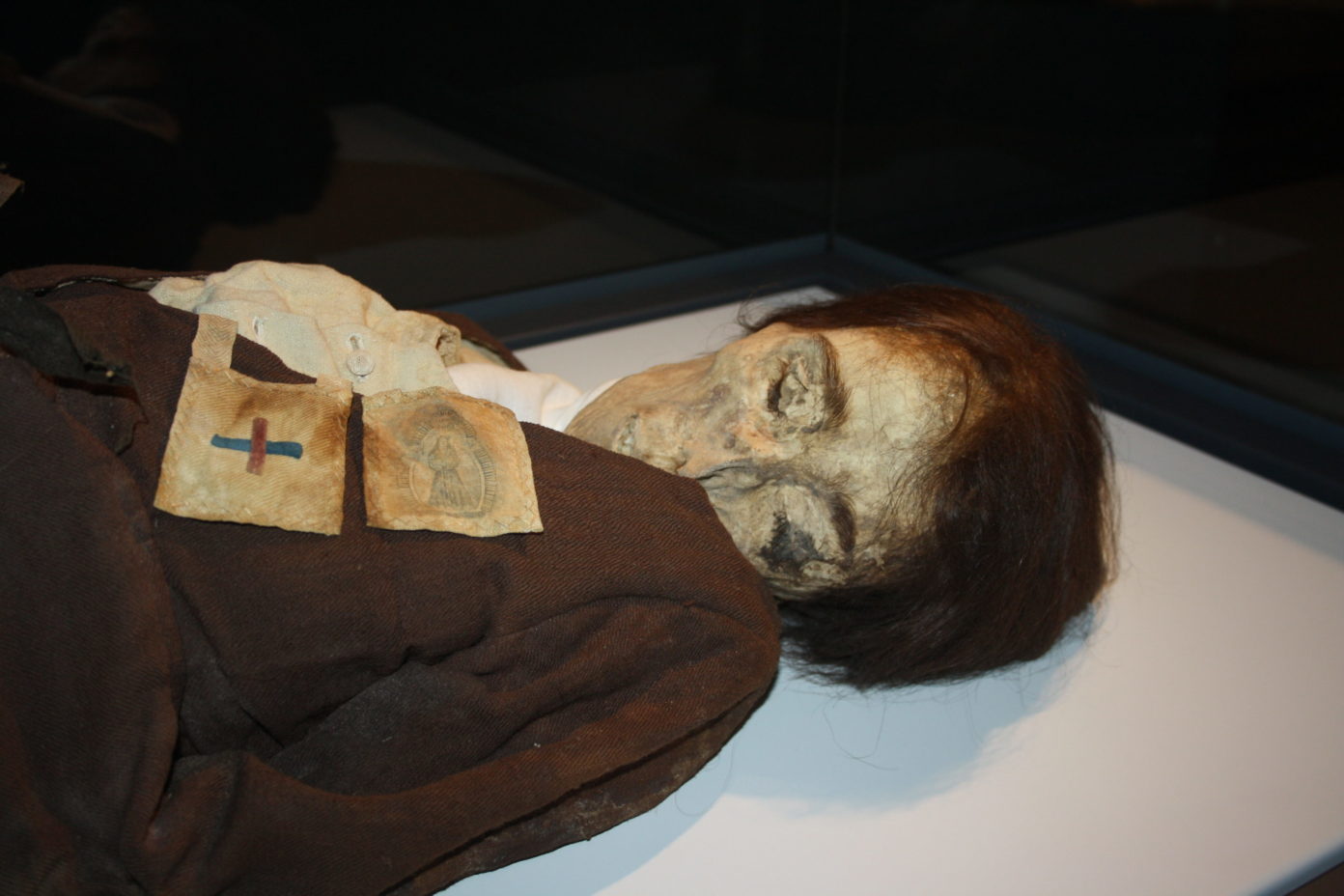 The clothing, key to know the mummies

The good state of preservation of the garments found has allowed the mummies to be dressed in linen, silk or wool, while those that do not retain their original clothing because it was found very deteriorated have been covered with a linen cloth. Most of them wear religious habits such as those of St. Francis or St. Teresa in the case of adults, while the children wear children’s costumes that also allow to know the traditional clothing. 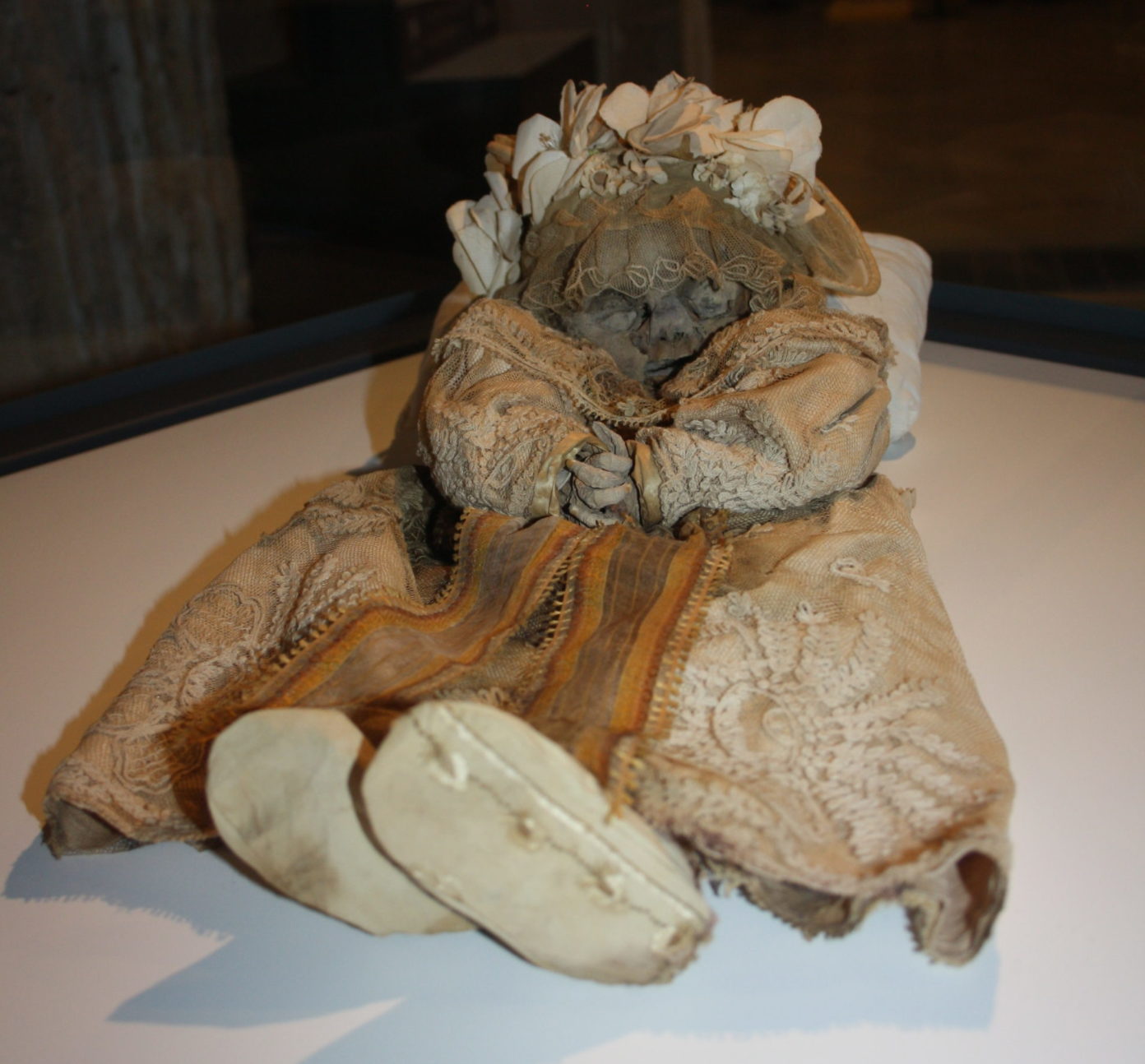 The clothing has been key to know what year the mummies could date from. Many of the mummies have been found wearing straight last shoes, because in the past, shoes could be worn on either foot. It was not until 1850 when they began to manufacture shoes with a last adapted for the right and left foot; therefore, this reference has helped researchers to chronologically date the footwear and to know that some of the mummies are prior to 1850. The historical documentation has allowed to know that some of the shoes came from Central Europe.

The museum can be visited with a guide on Fridays, Saturdays and holidays from 10 am to 11.30 am, from 4 to 5.30 pm and only in summer from 6 to 7.30 pm, and on Sundays from 10 to 11.30 am. The municipality of Quinto keeps other valuable buildings such as “the portals” that acted as customs, as well as having a defensive use the Casa del Cura (XVI century), one of the best examples of Aragonese Renaissance mansion.

Do you plan to travel to the Museum of Mummies of Quinto?

You can visit the Monastery of Rueda (36 km) in Sástago and the Old Town of Belchite (28 km) or Goya’s hometown of Fuendetodos (47 km), 40 minutes away, in the Campo de Belchite region, just half an hour from Quinto.

Facebook
Twitter
Pinterest
WhatsApp
Email
Suscríbete a nuestro boletín
Artículo anteriorInterview to Javier Sierra: “If I had been born in a land without myths, I probably would have dedicated myself to plumbing”
Artículo siguienteNatalia Chueca: “A commitment like Zaragoza’s to electrify public transport is unknown in other cities in Spain”.