Aragon, the land with the largest production of black truffle in the world

In the province of Teruel there are perfect conditions for the production of this fungus and more than 80 tonnes are harvested every year.

Truffles are a culinary treasure known since ancient times, fungi to which all kinds of virtues are attributed. They stand out for their intense aroma and flavour, which can turn any dish into a delicious delicacy. And also for their high price. This edible underground fungus grows associated and in symbiosis with the roots of a tree, generally holm oaks or kermes oaks, trees that proliferate in Aragon.

Behind each black truffle there is a laborious work that goes from planting, increasingly necessary due to the decreasing production of wild truffles and an increase in demand, to harvesting, which has become an art. A truffle plantation takes between seven and ten years to bear fruit and harvesting requires trained dogs to distinguish the ripe truffles. The cultivation and harvesting of truffles, especially the latter, is hard work that requires people with great experience.

As a general rule, truffle-growing areas in Spain are located in the provinces of Teruel, Zaragoza, Huesca, Soria, Navarra, Logroño, Guadalajara, Cuenca, Valencia and Castellón and in the area of Catalonia. In other regions such as Andalusia and Extremadura, different species of truffle can also be found, although in smaller quantities.

In Aragon, the black truffle (Tuber melanosporum) has become the black diamond par excellence, a delicacy recognised throughout the world. Of the 150 tonnes harvested worldwide, more than 80 tonnes are harvested in the Aragonese region, making it the largest producer and exporter of black truffles in the world. The 10,000 hectares planted in this region account for almost a fifth of all the hectares under cultivation of this fungus. Of all the truffles harvested in Aragon, practically 90% of the production is exported to France. 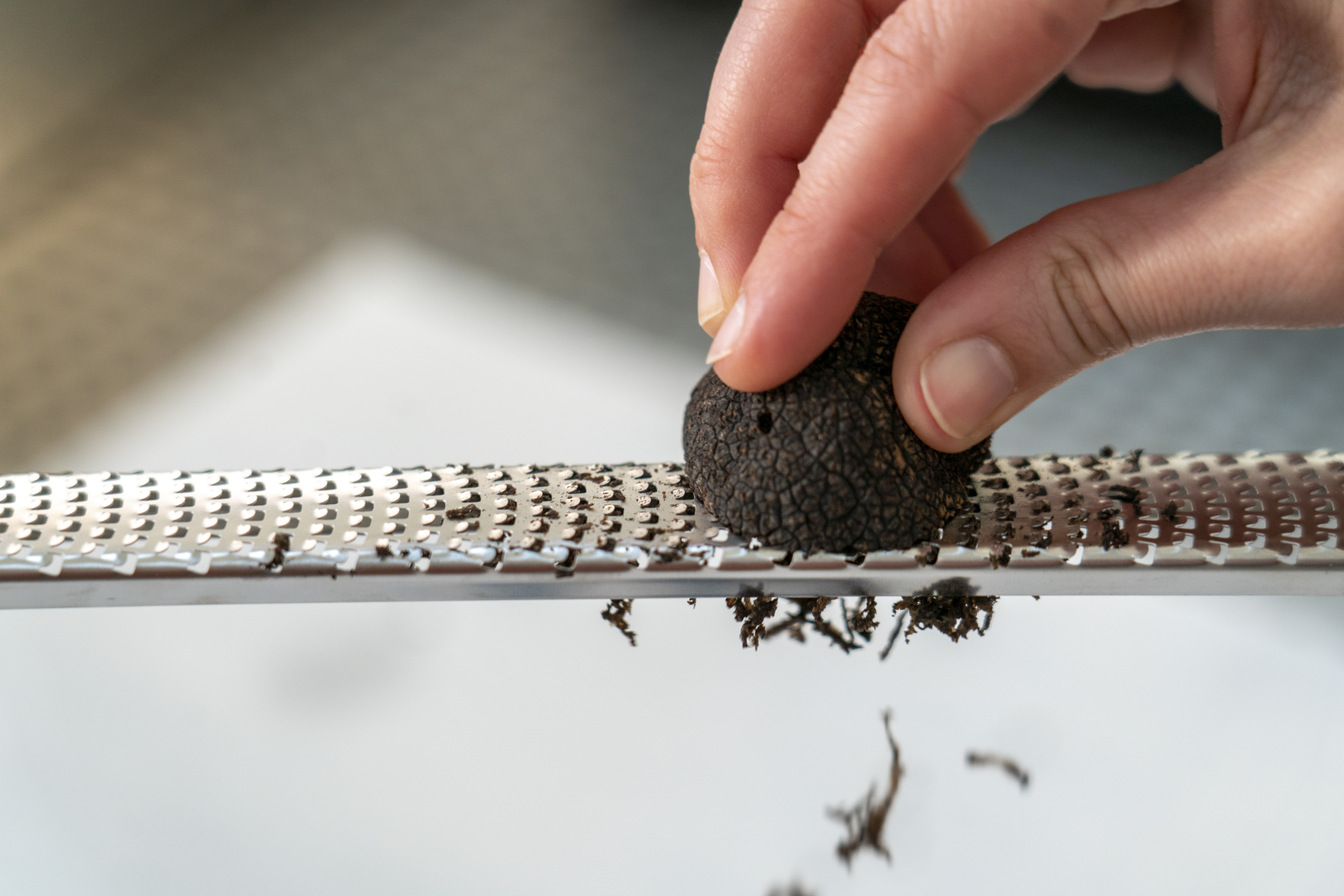 Precisely in these winter months and until mid-March, the truffle is the aroma of the Aragonese lands, such as the Jiloca, Cuencas Mineras, Campo Romanos, Cinco Villas, Moncayo, Graus and Jacetania regions; and above all in Sarrión and the mountain ranges of the Gúdar Javalambre and Maestrazgo regions. It is in this area of Teruel where the best conditions for its growth are found, making it the mountain range with the highest truffle production. In the province of Teruel alone there are more than 7,000 hectares cultivated with truffles in a total of 148 villages. Sarrión is, together with Teruel, the Spanish capital of the black truffle, and it is there where the International Truffle Fair, Fitruf, is held every year.

The major consumers of truffles produced in Spain are France and Italy, where there are weekly markets where truffles are a regular product, and in some cases the only one. French and Italians have been incorporating truffles into their dishes for years, not only in restaurants, but also in private homes, where they are never lacking at Christmas.
In recent years, Spain, and of course Aragon, has joined in with truffle farming training and the promotion of truffles to bring this delicacy to domestic homes, both in Aragon and abroad. The different Aragonese institutions, the Association of Truffle Growers and Truffle Collectors of the Province of Teruel (ATRUTER) or the Association of Truffle Collectors and Growers of Aragon, among other agents, contribute to this.

If it were not for the coronavirus, tourist and gastronomic events related to this fungus would be going on at a frenetic pace in the region, especially in the Teruel area. The truffle fairs in Sarrión, the Truffle Fair in Vera de Moncayo, the Black Truffle Days in Daroca or the Fresh Truffle Market in Graus, among others, are all being held in the region.

The truffle, the most sought after condiment

The truffle’s aromatic capacity makes it perfect for seasoning different gastronomic options, which is why the Aragonese truffle is finding its way into more and more homes every day. The products that are best truffled are cheeses, fatty meats, butter, rice, pasta and oil and eggs, among others. These last two foods are the most popular to be truffled.

In recent years, there has been a proliferation of interesting truffle products that can also be purchased online, such as sausages and cured meats like chorizo, sausage, sausage or cheese with truffle, as well as some more select ones like foie gras with truffle. Also drinks such as beer with truffle, irresistible for lovers of this barley juice.

A pioneering panel of experts in truffle tasting

The black truffle of Aragon has a specific unit in the Centre for Food Research and Technology (CITA), directed by the Aragonese researcher Pedro Marco, where scientific-technical support is provided, specialising in the research and integral development of truffle growing.

Truffle harvesting
Since 2018 and thanks to a grant from the Investment Fund for Teruel (FITE), a pioneering group of experts make up a truffle tasting panel whose main objective is to define organoleptic criteria on the quality of these fungi, starting with the black truffle or Tuber melanosporum. At present, there are no expert panels that taste truffles or truffle products, and the only standard for evaluating the black truffle does not consider the aroma, but only the weight, shape and presence of the fungus. The panel has established a tasting sheet for Tuber melanosporum, called the ATRUTER Model, which serves as a basis for grading the black truffle with homogeneous organoleptic criteria.