At an altitude of 1,300 meters and from some of the highest vineyards in the Iberian Peninsula, Bodegas Bal Minuta wine is born, a wine with the peculiarities of the mountain, ecological and that keeps inside the illusion of an innovative project rooted in the territory. Its modern winery is integrated into the mountain landscape and is environmentally friendly. 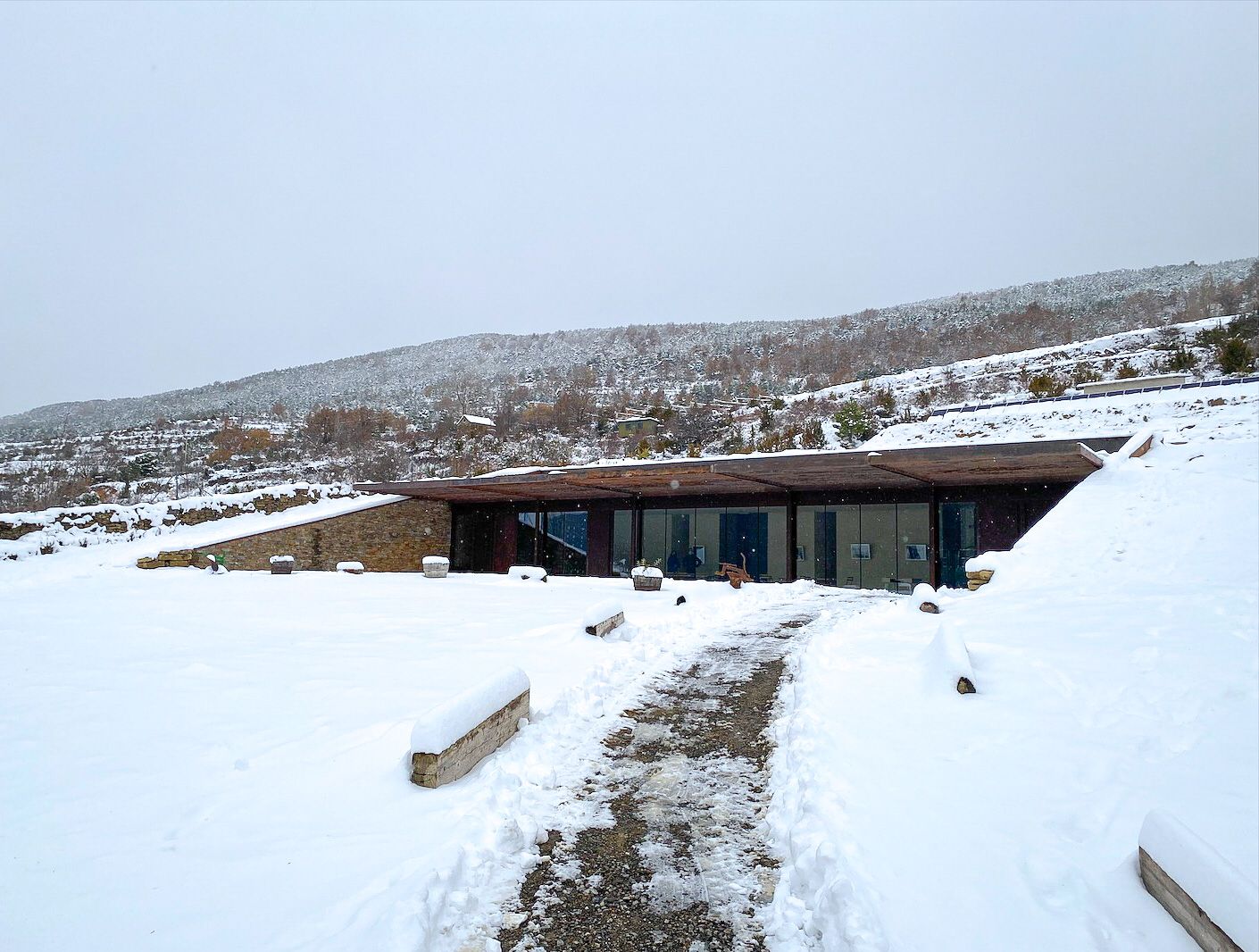 Pilar Gracia and Ernest Guasch met at university, while they were both studying oenology at the Rovira i Virgili faculty in Tarragona. After finishing their studies they went to France, Chile and Catalonia, specifically Priorat. In the Aran Valley they began what will be the germ of Bodegas Bal Minuta, with a climatic and soil study to determine where to plant their vines. If there is one thing they are clear about, it is that they want to do it at high altitude, next to the Pyrenees, because only this way they will obtain grape varieties to make a wine with unique characteristics, since the thermal difference allows a greater assimilation of aromas and gives the wines a higher acidity, resulting in “more aromatic, fresher and with less alcohol content”. Pilar defines them as fresher wines, which is the objective of the project that will be developed later, but also “healthier wines”, because they have a greater number of antioxidants. “In high mountains the incidence of UVA radiation is higher, and that makes the grape skin thicker and has a higher concentration of antioxidants,” she says.

Despite all the benefits, the high altitude vineyard faces other difficulties such as wild animals and the need to fence and enclose the plantations or climatic risks, such as frost in spring or hail in summer.

Where was the ideal place to install the high-altitude vineyard? Pilar’s maternal grandmother is from Barbenuta, a small village 9 kilometers from Biescas (Huesca), located at an altitude of more than 1,200 meters above sea level and abandoned at the end of the 1960s. School concentration and development made this tiny village empty of neighbors and only kept their houses as second homes. Recovering Barbenuta through wine? Said and done. Pilar and Ernest are now, together with their two children, the only inhabitants of Barbenuta.

In 2012, after taking soil samples all over the hillside near Barbenuta and doing feasibility studies, Pilar and Ernest start recovering Barbenuta fields and planting vines. Varieties such as Riesling, Gewürztraminer, Chardonnay, Pinot Noir and Cabernet Franc gave rise to the highest vineyards on the Iberian Peninsula at the time. “At one time we were the highest vineyards on the peninsula, but now we can’t be sure because the high altitude vineyard is very fashionable due to the characteristics and quality it has,” Pilar points out.

In 2013 they harvested their first harvest, which was not marketed because it was experimental. It was not until 2015 that the first fruits of what was called Vino de las Nieves, bottled in Biescas, were harvested. The project was growing in quality, with the acquisition in 2016 of centenary garnachas in Embrún (Valle de Hecho) and with the addition of vineyards in the surroundings of Barbenuta.

In addition to their own characteristics that they have been able to demonstrate with their own pines, the production of the high mountain vines is also lower, because the extensions of the land cannot be very large. At Bal Minuta there are about 1.2 kilos of yield per vine, which means that the winery’s production is limited. “We are not concerned about quantity, what we want to offer is better wine, but not more bottles; to grow in quality, and that is why we only release between 8,000 and 10,000 bottles a year. If a winery with 40,000 bottles is small… what is ours? -She wonders, “We don’t care”, clarifies Pilar.

All the wines of Bodegas Bal Minuta are sulfite-free and only some of them spend a short time in French oak barrels with minimal toasting.

It is in Barbenuta where they have recently inaugurated their underground winery. At almost 1,300 meters, from Bodegas Bal Minuta they wanted to pay tribute to the shepherds’ houses of the valley, of which there are still remains in the area, based on three elements: rock, water and air.

The winery, less than a kilometer before reaching Barbenuta, goes so unnoticed that you can pass it without noticing. Precisely what they wanted to achieve with its construction was a complete integration with the landscape, a total commitment to efficiency and technology; values that combine perfectly with what Bodegas Bal Minuta is.

“We work organically, we wanted our project to be mostly sustainable, so the winery had to be as well. It was a huge architectural challenge, because we had to build under the mountain, in a family field, with local materials and integrate the whole building into the landscape. We wanted it to be as inconspicuous as possible,” says Pilar. The goal was achieved: Cortex steel, concrete and glass blend in perfectly with the mountain, with shades of brown and gray. Energy is 100% renewable and is provided by several photovoltaic panels. Inside, hygiene in the cellar predominates. “For us it is very important, that’s why we also have materials such as stainless steel, the cleanest for fermenting,” says Pilar.

With this winery, they are calling on people to get to know the traditional mountain areas, the zero kilometer product, and they are firmly committed to high-altitude wine. “We like to show what we do and tell our project because it is very personal, because we do not want to grow, because in artisanal products there is much of the people who elaborate them in them”.

The winery can be visited on guided tours or tasted at its wine bar from Friday to Sunday. 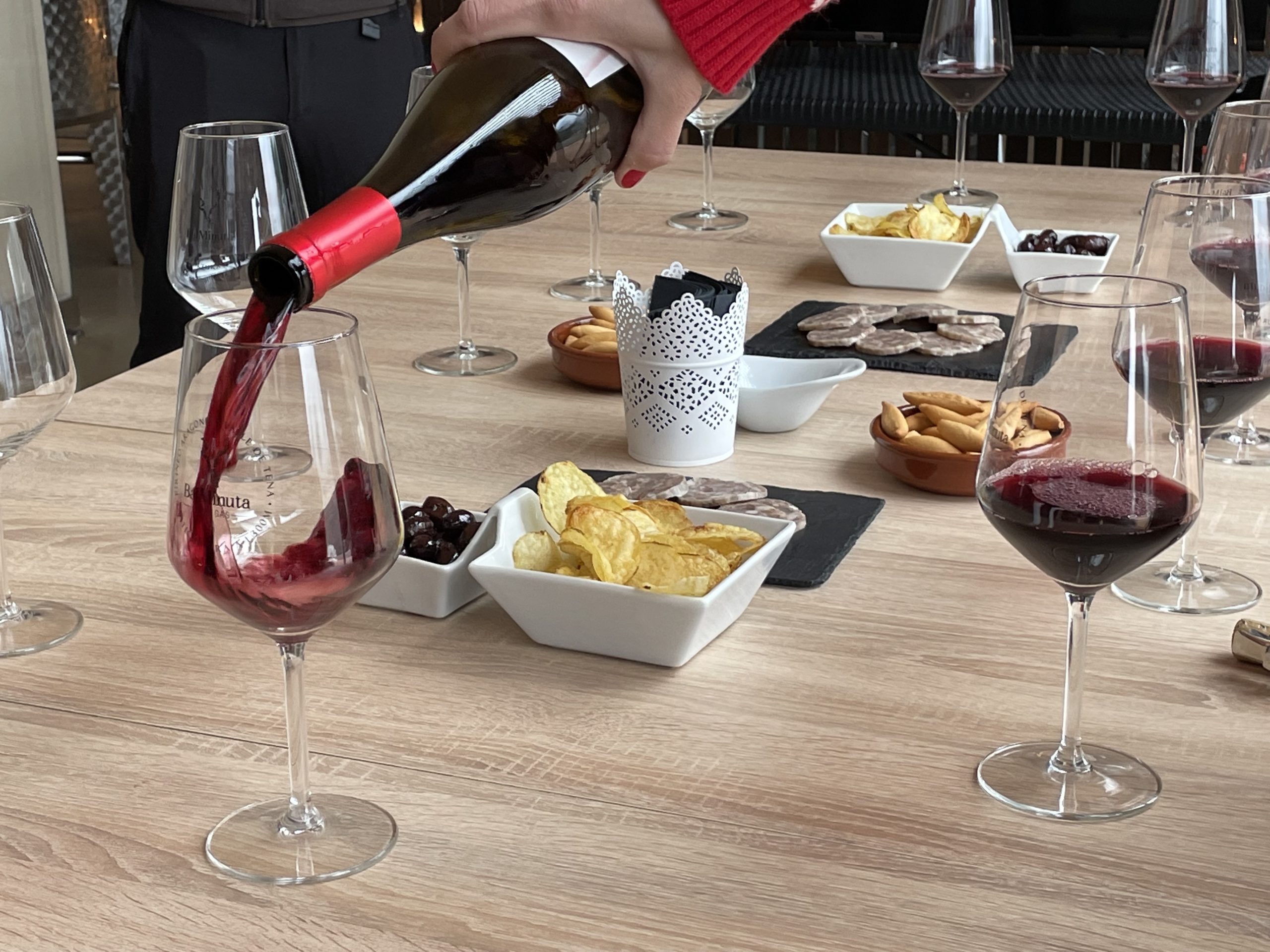 Learn more about other wines from Aragon here at GoAragon

Facebook
Twitter
Pinterest
WhatsApp
Email
Suscríbete a nuestro boletín
Artículo anterior
Alma Mater Museum (The museum of the Diocese of Zaragoza), a hidden secret where art, history and heritage go hand in hand
Artículo siguiente
8 plans not to be missed in 2022 in Aragon

Operon, the biotech company from Zaragoza that has its products all over the world