The Cistercian Order played a great role in the Kingdom of Aragon. And its legacy can be visited by following the route of the three most important Cistercian monasteries: Piedra Veruela and Rueda. The three monuments are located in border areas and are quite distant from each other.

The three monasteries follow fairly common architectural lines, faithful to the international Cistercian architecture of the late 12th and early 13th centuries. Despite this, there are major differences between them that make them unique, as is the case of the layout of the heads of the monasteries. The Monastery of Veruela has the most Romanesque features of the three. On the other hand, all of them have Muslim influences and Mudejar features as a result of the population that inhabited the province.

Despite the distance that separates the three monasteries, it is possible to visit them on different routes and at the same time enjoy other points of interest and attractions close to the monasteries. The Government of Aragon has launched 7 routes to get to know the Crown of Aragon better, including the route of the Cistercian Order, which proposes a visit to the Monastery of Veruela, next to Tarazona and Grisel, where you should visit the well of Aines and the castle; the Monastery of Rueda, extending the visit with Caspe and the church of the Compromise; and the Monastery of Piedra together with Calatayud.

At the foot of the Moncayo mountain, the Monastery of Veruela, a complex with a church of cathedral proportions, imposes itself. Photograph Alfredo Cortés
In the 12th century, on the slopes of the Moncayo, the first Cistercian monastery in Aragon was built. Prayer and work were the pillars on which the life of its inhabitants, the monks of the Cistercian Order, was based. Their arrival enriched the area with new spiritual and cultural values, but also economic and political ones. They were experts in managing water resources and with the river Huecha so close at hand, they set up an extensive network of irrigation channels, dams and mills.

The interior of the monastery, surrounded by a wall, contained everything the monks needed for their activities: the water, the mill and the vegetable garden. During the visit you can see the church, which is sober but of cathedral proportions. The cloister is typical of Levantine Gothic, and following all the rooms such as the chapter house, the refectory or the monks’ room, you will learn first-hand what life was like in the monastery.

The Order inhabited Veruela until 1835. The monastery was abandoned with the confiscation of Mendizábal and became a romantic place, a summer destination and the perfect place to cure the ailments with the air of the Moncayo. At the end of 1863, Gustavo Adolfo Bécquer arrived there with his brother. It was there that he was inspired to write Letters from my cell.

It is essential to book in advance to enter the complex. 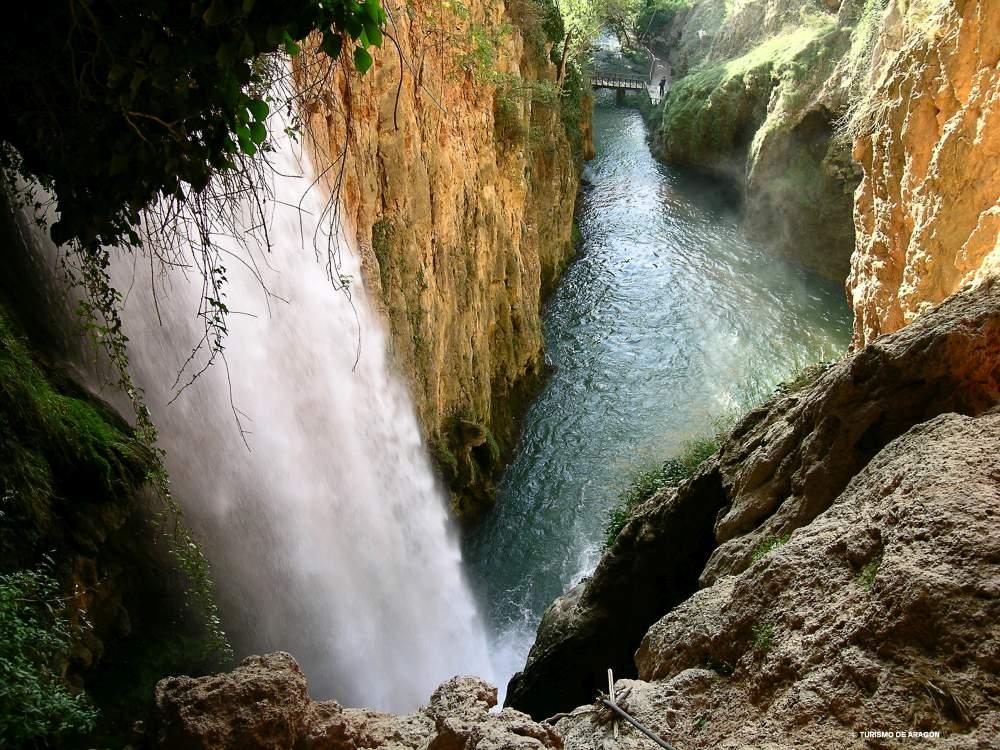 A monastery in the heart of nature. The Monasterio de Piedra is surprising as soon as you arrive at the natural environment created by the river Piedra, a spectacular natural site on its way through Nuévalos (Zaragoza), where the Cistercian monks founded a monastery in the 12th century in an unusual orchard. Waterfalls, caves and beautiful waterfalls coexist in an orchard where vegetation reigns in the midst of an arid landscape. There, in this Natural Park, where water emerges from nowhere, the monks built their monastery, where you can still visit the cloister, the chapterhouse, the kitchen where the first chocolate in Europe was made, the church and its crypt, the refectory and the lavatory.

It is one of the most visited places in Aragon, a haven of peace, where water is the protagonist. The most famous waterfall is the Cola de Caballo (Horse’s Tail), known because it contains a large natural cave with stalactite formations.

Have you ever seen birds of prey up close? The visit is complemented with an exhibition of these animals (suspended by the covid) and a tour of the Wine Museum of the Designation of Origin Calatayud, located in the old cellar of the monastery.

With the pandemic, the capacity of the Monastery is limited, so it is best to book in advance online.

The Monastery of Rueda, between Sástago and Escatrón, is one of the greatest exponents of the Cistercian Order in Aragon. Set on the banks of the river Ebro, this superb monumental complex stands out for its Gothic cloister, its slender Mudejar tower, the austerity of the church and the great waterwheel, 18 metres in diameter, which gives its name to the monastery.

The wheel is a symbol of what the monks of the Cistercian Order were looking for when they wanted to found a monastery: water and earth, forests and silence. A place where life was based on prayer and cultivation of the land.

The Monastery of Rueda houses the Hospedería Monasterio de Rueda, a four-star hotel establishment with 35 rooms belonging to the Network of Hospederías of Aragón. Its restaurant still has the thousand-year-old barrels where the monks used to prepare their own wines. There they prepare cuisine with local products, cheeses from Samper de Calanda, Teruel D.O. ham with olive oil from Bajo Aragón, local bread and artisan products from the area, among others.

The monastery requires prior appointment as visits are always guided.

Facebook
Twitter
Pinterest
WhatsApp
Email
Suscríbete a nuestro boletín
Artículo anterior
Colegio Juan de Lanuza: new addition to the top 50 schools according to Forbes magazine
Artículo siguiente
Pau Amoretti: “We dress for the outside and not for ourselves”

Miguel Luis Lapeña: “The most important conclusion is that it was born from the business sphere, from the social sphere”

Ana Alcolea: “Literature in Aragon is in very good health”