“Aragón abre camino”, shows Aragón as a gateway to the Way of St. James 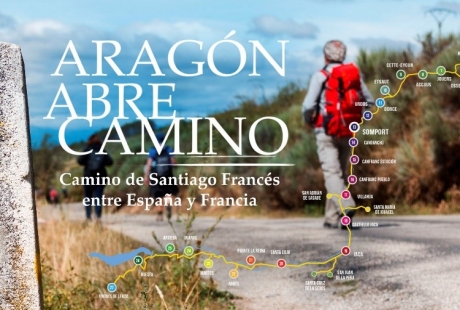 2.3 million euros will be invested in the Monastery of San Juan de la Peña through European funds.

The Department of Industry, Competitiveness and Business Development, through the Directorate General of Tourism, has launched a new campaign, “Aragon opens the way”, on the occasion of the feast of St. James in its Jacobean Year to promote the Way of St. James as a safe and sustainable tourist axis in Aragon. The objective is to promote the Somport as a gateway to Spain from French territory and work is already underway to improve and promote this route.

In addition, through Next Generation EU funds, 2.3 million euros will be invested in the New Monastery of San Juan de la Peña, an essential enclave on the Way of St. James in Aragon. They are included in the National Tourism Plan Xacobeo 2021-2022, within the “Line of Maintenance and rehabilitation for tourism purposes in the influence of the Camino de Santiago that is developed in the framework of the Recovery, Transformation and Resilience Plan of the Government of Spain and that will go to the refurbishment of current facilities, conditioning of exterior spaces, facades and roofs, enclosure walls, renovation of exhibition spaces and repair of the exhibition center’s roofs.

The Vice-president and Minister of Industry, Competitiveness and Business Development, Arturo Aliaga, wanted to claim Aragón as “a territory that has always taken great care of the different routes of the Way of St. James” and that, in addition, “manages to attract a tourist profile that seeks to be in contact with nature and here we have countless natural resources”.

For this new campaign, a promotion will be carried out in the months of July, August and September in the media and social networks through challenges and contests. A new website has also been set up with all the relevant information on the French Way of St. James through Aragon, offering tools to plan the trip, learn about the heritage, find accommodation, etc. It is also aimed at attracting an international audience. www.caminodesantiagoporaragon.com. In addition, the promotion will be reinforced with the production of a video that captures the experience of walking this route of the Camino.

During this year, joint actions are being carried out to promote the Way as a whole, as a first-class product of the Spain brand. To this end, joint initiatives have been launched, such as the Gastronomic Passport and the publication of a joint brochure in which gastronomy and heritage are the main themes. With a view to the international promotion of the Way of St. James, travel professionals and foreign specialized press are expected to arrive in September for a tour of the entire Way of St. James in Spain, which is being organized with the Spanish Tourist Offices abroad.

The Government of Aragon’s commitment to the Camino de Santiago was already reflected at FITUR 2021, where this element was one of the protagonists, along with the figure of Goya and sustainable and nature tourism. An example of this was the 3D experience that visitors could see at the Community’s stand, which recreates with historical rigor what the Hospital de Santa Cristina was and its original importance in the passage of pilgrims on the French Way of St. James.

The Department of Industry, Competitiveness and Business Development, through the Directorate General of Tourism of the Government of Aragon, launched the strategy to promote Aragon as a gateway to the French Way of St. James, starting its promotional activities with the illumination of El Pilar in Zaragoza with the yellow arrow, the official lighting symbol, on the blue facade of the Basilica on the night of December 31, 2020, giving the starting signal to a range of actions to celebrate the Holy Year.

Visitors to the Way of St. James in Aragon

Most of the pilgrims who make this route are Spaniards from Aragon, Catalonia, Valencia and Madrid. Foreigners of 61 different nationalities also make the pilgrimage,

Plans for a different New Year’s Eve. Experiences in Spain to end the year