The Chinese journalist, Ziliang Zhan, is an influencer who lives in Spain and is followed by 220,000 people on his social networks and specializes in art, culture and history.

The Chinese journalist, Ziliang Zhan, specialized in filming, has made a one-week tour of Aragon in which he has recorded two video-blogs (VLOGS) for which Zaragoza capital, the Monastery of San Juan de la Peña and the National Park of Ordesa and Monte Perdido have been selected, and a “live-streaming” (live broadcast) of 90 minutes that has been carried out in the city of Teruel. It has also visited other emblematic points of the Community to create specific material for the Chinese market, such as Albarracín, Loarre Castle, Mallos de Riglos, La Cuniacha Fauna Park, Panticosa Spa, Aínsa, Sommos and Enate Wineries, on the Somontano wine route, and Alquézar. 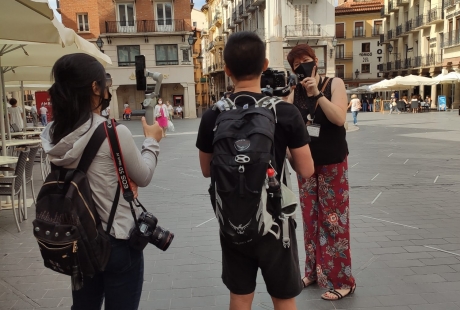 This project focuses on the latest consumer trends developed in China during the 2020 confinement period, in which the use of digital tools has drastically increased. For this reason, the most powerful video channels in the Chinese market have been used, i.e. platforms such as Douyin (Tik Tok in Europe) and Wechat Channel, with video channels linked to the European mini-program Wechat Travel Experience, deployed in more than ten countries to market the tourism offer.

The Vice President and Minister of Industry, Competitiveness and Business Development, Arturo Aliaga, insisted on “the need to address the audience through new formats to promote Aragon’s tourist attractions”. He also recalled that “China is a very powerful tourist market” and that, “before the pandemic arrived, it was already the second in number of visitors with 87,433 tourists in 2019”.