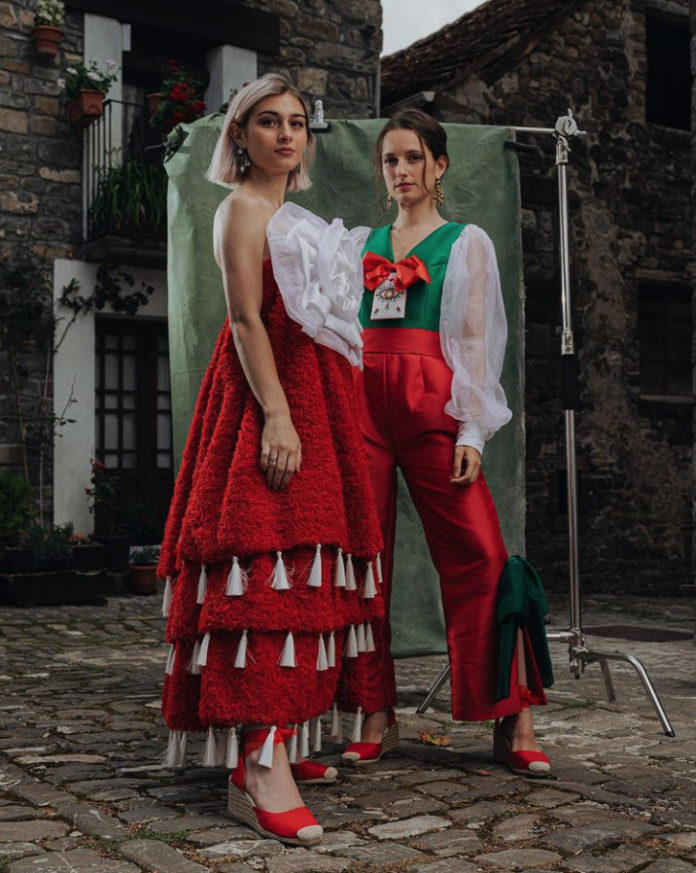 Their proposals have been part of an exhibition to commemorate the 50th anniversary of the Ansotano Costume Day. It consists of six looks that reflect the tradition of this garment and modernize it while respecting its essence. Discover how Enrique Carrera reimagines the traditional Ansotano costume and turns it into haute couture.

It began as a project of the Higher Degree in Fashion Design, and has ended up becoming an exhibition admired in the town of Ansó itself. The six looks that the young designer Enrique Carrera has created have enchanted both the clothing lovers of the town of Ansó and the fashion enthusiasts.

“I was inspired by the paintings in which Sorolla portrayed the Ansotan women,” explains Carrera, “I was struck by the fact that such a renowned painter was interested in women from a Pyrenean village, who made migratory movements to make a living”. The young man refers to the women known as “golondrinas”, Ansotanas who traveled to France to work making espadrilles and, on their return, crossed Spain selling the so-called “Swiss tea”.

Inspired by them, he created a collection of six looks in which he brings his personal vision with the aim of “elevating the category of traditional costume as a category of today’s fashion”. To do so, he has used haute couture techniques: “it is a Prêt-à-Couture collection, a mix between haute couture and luxury Prêt-à-Porter, mixing Prêt-à-Porter tailoring with traditional techniques related to haute couture, such as embroidery or modeling on mannequins”.

The collection is called Trasunto, a concept that Enrique Carrera has taken beyond its own meaning. Trasunto means “faithful representation of something”, an objective that his costumes do not seek to reproduce the Ansotano costume but to reinterpret it to pay tribute to “women who were super strong and traveled to survive and earn money,” he says.

A modern vision that has delighted Ansó

Carrera has not only modernized the look of the traditional Ansotan costume, but also its materials: “It was made with wool cloths, cottons, linens… fabrics that were made by the same families that sewed them. I have opted for mikado, silk shangtung, organza, pleated satin…”. However, all these changes do not prevent her creations from clearly recalling her inspirations: “They evoke with colors, silhouettes, with characteristic elements…I want people to find similarities with the traditional costume, but see something different from what they are used to seeing”.

An example of this can be found in the adornments, the accessories in the form of jewelry and ornaments that accompany the Ansotano costume. Enrique has evoked them by creating, for example, embroidered scapulars and other additions that help shape each piece.

Such was the respect for the tradition of Ansotan clothing that, when the designer presented his idea in the village, he received a very positive response and immediately the proposal to turn it into an exhibition arose: “I explained the project to the women in charge of the closet, to the town council… I showed them the figurines, they loved the idea and wanted to present it”. But the collaboration of the inhabitants of Ansó went beyond the simple approval, two of the young women of the village offered themselves as models and many women lent him authentic Ansotan jewels to use them as inspiration. And once the costumes were exhibited, during the celebration of the 50th anniversary of the Costume Day, the success was overwhelming, as its creator recalls: “The collection has been very popular in Ansó, there have been people who have been excited, people who have come to see the exhibition several times… the feedback has been very positive and I have been thrilled”.

His Ansotano costumes can be seen in Zaragoza

The fame of the Ansotan costume knows no boundaries and it seems that neither does that of its reinterpretation, because Enrique is now busy with the future exhibition that, in September, will show his costumes in Zaragoza. The place could not be more appropriate: the Ansotan house that has just reopened its doors in the Parque Grande José Antonio Labordeta. He is also preparing another collection that he will present at the next Aragón Fashion Week. These are the next steps of a designer who, recently graduated, can already boast of having made a collection professionally and not as a student. All thanks to his vision of the Ansotan costume that, by the way, helped him to get an A in the project.

5 green spaces in Zaragoza resume the program “Parks with Heart”