Fitur: A virtual immersion to get to know the best of real Aragon 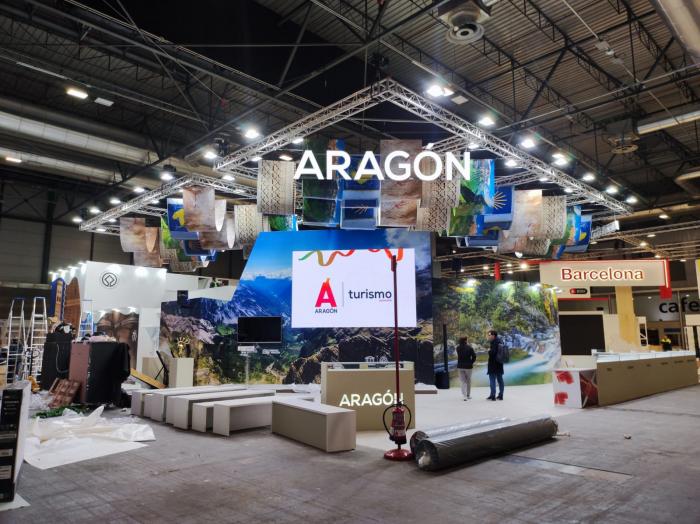 The Vice President and Minister of Industry, Competitiveness and Business Development, Arturo Aliaga, has participated in the opening ceremony of a new edition of the International Tourism Fair held at IFEMA, which is one of the major international benchmarks of the tourism sector.

Together with other institutional representatives have received at the stand of Turespaña the visit of Their Majesties the King and Queen, who have toured several pavilions and exhibitors. The Vice President of Aragon has been “very satisfied” because he is seeing how Aragon “is presenting something resounding and putting on the table the heritage, but also something more important, the 3.3 million tourists and the 7.6 million overnight stays (until November) that the Community has had in 2022”. Aliaga also wanted to highlight the effort of the sector “that has assumed costs of all kinds, has been reborn and has presented a balance sheet in 2022 to take off your hat”. “The feeling in the sector,” Aliaga concluded, is that Aragon’s leadership in inland tourism is being consolidated.”

In the absence of completing the statistics for 2022, Aragon received 3.3 million tourists up to November, who made 7.6 million overnight stays. At this point, this is just over 200,000 fewer tourists than in 2019, a record year for Aragonese tourism. It should also be noted that, in Aragon, the tourism sector represents almost 9% of GDP and is made up of more than 8,000 tourism companies in various fields and with different structures, predominantly SMEs and self-employed and also being, if not the most important, one of the key sectors to fix population in the territory contributing, without doubt, to the fight against empty Spain.

The Aragon stand measures 500 m2 and the theme focuses on the four cultural and natural assets of Aragon declared World Heritage by UNESCO: Aragonese Mudejar art, the Aragonese section of the Camino de Santiago, the Pyrenees-Monte Perdido and the Rock Art of the Mediterranean Arc. It is located in Pavilion 7 (7B11) of the IFEMA fairgrounds in Madrid.

These elements are intended to showcase both the natural areas and the cultural manifestations of the Community and, at the same time, the wide range of leisure and active tourism activities and products such as ecotourism, wine tourism, astro-tourism, family tourism, gastronomic tourism, slowdriving, etc.

The Food of Aragon will also have a prominent place in the Gastronomic Corner, an area designed to enhance, through the technology offered by the table of the senses, the perception of the smells, flavors and shapes of the noble Food of Aragon. In this corner, the Department of Agriculture, Livestock and Environment will make ten passes that will alternate showcooking with interpreted tastings focusing on the differentiated quality of Aragon.

From Wednesday to Friday, the activity will highlight the value of Aragon’s agri-food heritage using emblems such as PDO Teruel Ham and Ternasco de Aragón PGI, as well as figures such as Food Crafts of Aragon, C’alial and organic production. The explanations will be supported by audiovisual resources, technical effects and tastings.

Friday January 20 will be the day of Aragon. In the morning there will be special events to commemorate this day with an institutional tour of the stand by the Vice President and Minister of Industry, Competitiveness and Business Development, Arturo Aliaga. Afterwards, Aragon will present at FITUR the candidacy of the jota as a UNESCO Intangible Cultural Asset with a performance and will conclude with institutional speeches.

The Department of Industry, Competitiveness and Business Development has participated in the presentation of the project to revalue the legacy of Al Andalus at FITUR 2023, at the Andalusia stand. It does so through the Agrupación Innova Experiencia Andalusí, formed by the Government of Aragon together with the Mancomunidad Costa del Sol-Axarquía, the Community of Calatayud, the Mancomunidad de Municipios del Guadajoz y Campiña Este de Córdoba, the Diputación de Soria, the Fundación Visit València de la Comunidad Valenciana and the company Open Concept through its platform Let’s Go Halal (www.letsgohalal.com). It is dedicated to the promotion of Spanish destinations and the commercialization of specialized tourist services in the Arab and Muslim markets.

The Innova Experiencia Andalusí project has been one of the 36 selected in the first call for grants of the “Experiencias Turismo España” Program, launched by the Secretary of State for Tourism within the framework of the Recovery, Transformation and Resilience Plan. A total of 231 projects were submitted to this first SETUR call, corresponding to 2021.

The Group will allocate the planned funding -a total of 1,003,800 €- to the “creation, improvement and renovation of tourist experiences based on the revaluation and articulation of the tangible and intangible heritage and the Andalusian footprint, with special attention to Arab and Muslim tourism”. The Department of Industry of the Government of Aragon has a budget of 200. 200,000 and the actions it will implement are those listed in the attached schedule, for example: Construction and creation of a coherent narrative on the legacy (stories, life stories, culture, values) and Andalusian heritage in Aragon; Updating of the Halal Tourism study and design of a roadmap; Training for the public tourism sector in Andalusian and Mudejar legacy; Design of Andalusian legacy routes through the territory with cultural heritage; or editing and translation of specific tourism materials into Arabic, English and French.

Most Beautiful Villages of Spain

Aragon also presented at its stand a video dedicated to the 13 villages of Aragon that are among the Most Beautiful Villages of Spain. They are Ansó, Albarracín, Alquézar, Ainsa, Anento, Calaceite, Cantavieja, Mirambel, Puertomingalvo, Roda de Isábena, Rubielos de Mora, Sos del Rey Católico and Valderrobres. The aim of this audiovisual is to highlight the experiences offered in these localities of adventure, gastronomy, history, tradition, territory, etc.

Facebook
Twitter
Pinterest
WhatsApp
Email
Suscríbete a nuestro boletín
Artículo anterior
Joaquín Olona: “The most important thing we have are farmers”
Artículo siguiente
Zaragoza will celebrate its second festivities in honor of Goya, its international painter

María López Palacín: “what we do is to close the circle in today’s famous circular economy”

The Center for Agri-Food Research and Technology of Aragon conducts research on optimal conditions for the transport of fruit and vegetable products in biobased...