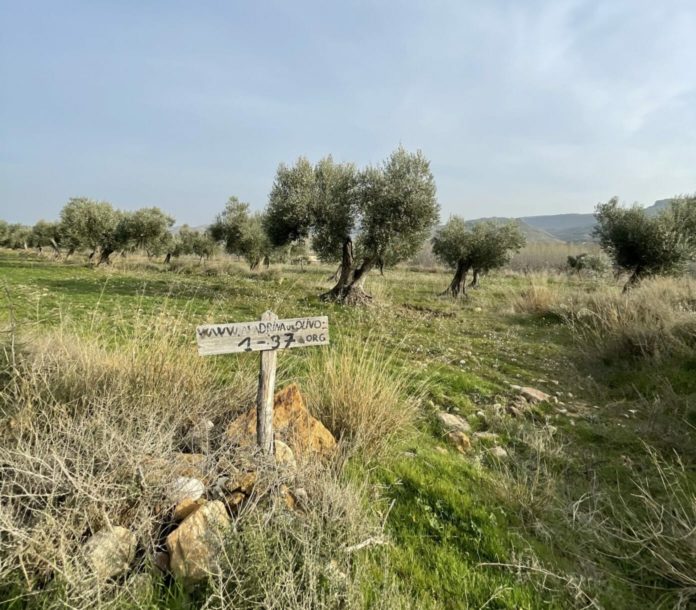 Oliete is located between Teruel and Zaragoza. This village has just over 300 inhabitants but almost 6,000 godmothers and godfathers Does it sound strange to you? We explain it to you: They are people and institutions that have decided to sponsor some of the centenary olive trees planted generations ago next to the village, and that, like its streets, have been abandoned in the second half of the 20th century.

In less than 100 years, Oliete has lost more than 2,000 residents. With them went projects, businesses and, above all, the future of the town. This is what those responsible for the initiative Apadrina un Olivo detected when, in 2014, they decided to do something to, at least, get the Olietanos to stay in the town. They noticed that there are a large number of centenary olive trees in the fields adjoining the town, trees whose fruit was no longer being harvested because their owners left. They saw the opportunity and set to work.

Seven years later, this initiative has recovered almost 15,000 olive trees between 100 and 1. 000 years old thanks to the collaboration of almost six thousand godfathers and godmothers, the driving force behind this project, as Alberto Alfonso, co-founder of Apadrina un Olivo, explains, are “people who not only baptize their olive tree and receive the oil (Protected Designation of Origin Aceite del Bajo Aragón) that is made from its fruit, they are also ambassadors in the fight against depopulation and guarantee the future of a rural town”. And they do so by promoting businesses and initiatives that start from Apadrina un Olivo but also by encouraging tourism in the area, because it is common for many of the collaborators to want to travel to Oliete to meet their sponsored child, baptize it and participate in activities such as oil tastings. “This helps the projection of the town and Aragón, because people come to visit their olive tree and discover the cultural park of the Martín River, the attractions we have in the town and in the province”, says Alfonso.

When the godfathers and godmothers visit Oliete, they are accompanied by some of the people who work in the initiative, many of them with intellectual disabilities or at risk of exclusion. In total, Apadrina un Olivo employs twelve families. They are in charge of taking care of the trees, weeding, making the oil, packing it or sending it, jobs that have been created in rural areas. Many have returned to the village of their ancestors, while others have been attracted by the initiative.

In addition, the recovery of the mill has made it possible to buy olives at a fair price from 150 farmers in the area, who provide the raw material to produce around 40,000 liters of oil per year. Of these, each sponsor receives two a year to thank them for their collaboration.

Most of them are in Spain, but there are also some in France, Belgium, the United States and even China. And there is room for many more, the aim of Apadrina un Olivo is to recover the 100,000 olive trees that were once the wealth of this area of Teruel and are now the basis of a project that brings it back to life.

As Alberto Alfonso explains, the international boom came after the project was included in a solidarity initiative that made 50 newspapers around the world echo. “That brought us godparents from up to 27 countries around the world”.

Giving value to a local product, favoring the economy of local producers, attracting investment and visitors… this is only part of what Apadrina un Olivo has achieved.

An idea that generates other projects

In spite to the olive tree plantations and the facilities to bottle the oil, the project has two facilities to transform the raw material: an oil mill in the town of Oliete and a canning plant that has just been recovered in Alacón, a nearby town. There, the oil is used to produce canned artichokes, peppers, olives, leeks… another business has been created in the rural environment thanks to Apadrina un Olivo.

In fact, the recovery of handmade preserves has led to the creation of its own brand to distribute these markets, Mi Huerto, which has already generated several jobs and wants to get more families to live in Alacón to recover the agricultural activity, which had been abandoned due to the lack of generational replacement.

The founders of Apadrina un Olivo are also working to set up in Oliete an “accelerator” of projects that generate a positive impact in the area, to reproduce initiatives like theirs, and that would serve to settle the population in rural areas.

Therefore, Apadrina un Olivo is not only a future alternative for Oliete, but the engine of many projects that can serve to revitalize this area of the province of Teruel.

A piece of town

When the godfathers and godmothers receive the orders, they read in the box a curious inscription: “Here inside goes a piece of town”. A phrase that gives value to the product they receive, handmade, but also contains the spirit of Apadrina un Olivo, because each sponsorship generates a link between the recipient and Oliete, fostering a love for the territory and the rural environment, which is ultimately the goal of this initiative. That, and to take care of some trees that gave wealth to the town for generations and must continue doing it for the next ones. That is why this is a social, environmental and rural development project.

Facebook
Twitter
Pinterest
WhatsApp
Email
Suscríbete a nuestro boletín
Artículo anteriorEnrique Torguet: “Competing in the global market is not about being from one place or another”
Artículo siguiente20 film crews will participate in the IV edition of ‘Belchite de Película / 24 hours of express cinema’.

In which projects did Itainnova collaborate in the bicycle sector?

Aragonese exports increase by 8.4% annually in the accumulated of the first eleven months of last year