We have already talked about the diverse tourist offer related to nature that the province of Huesca has. However, today we want to focus on the more cultural, on the museums and exhibition halls that are worth visiting when you pass through there. We have selected several of different themes so that you have a small sample of what you can find.

The castle of San Pedro de Jaca, popularly known as the Citadel of Jaca, is a military fortress of the sixteenth century that, architecturally, can be considered a museum piece because it retains all the characteristic parts of a military building of the time: drawbridge, magazines, parade ground … touring it will know firsthand the structure of this type of defensive buildings.

But it also houses a museum of military miniatures with more than twenty dioramas arranged chronologically. In them, more than 50,000 figures represent battles from ancient Egypt to the present day, and allow you to learn how equipment and weaponry has evolved throughout history.

This astronomical center combines entertainment and learning and programs different informative activities about the cosmos. Its planetarium, with a dome ten meters in diameter and five projectors, gives visitors the sensation of traveling through space. It also has a projection room with a 4D simulator for more playful experiences, allowing visitors to recreate the flight of an aircraft.

Although, undoubtedly, the great protagonist of this museum is its observatory, with four powerful telescopes from which you can observe the sun, the moon or the planets while images are projected in real time.

This is one of the main museums in Spain dedicated to Romanesque art. This center has an exceptional collection of mural paintings, recovered from churches and hermitages of the Aragonese Pyrenees, and numerous Romanesque and Gothic carvings that, together with its collection of medieval documents, capitals and gold and silver work, make it one of the most important museums of medieval art in the world.

The collections of the Museum of Huesca trace the history of the province through collections that have been increasing throughout its history. Archaeological remains and paintings from prehistoric times to the present, passing through the Roman period, the Muslim influence or the eighteenth century, starring Francisco de Goya.

It has an eminently informative and educational vocation, so it facilitates access to its funds, which bring together part of the archaeological, artistic and ethnological heritage of the province of Huesca.

It has three itinerary proposals to tour its rooms, one on funerary art and two others focused on gender, to recognize the importance of women’s contribution to history and art.

Center of Art and Nature (Huesca)

This modern building, designed by architect Rafael Moneo, is a museum dedicated to contemporary art. It not only hosts exhibitions in its different rooms, but also organizes outdoor activities that invite visitors to delve into the relationship between art and nature.

An example of this is the project called, precisely, Art and Nature, in which different international artists were invited to create works in natural areas throughout the province, turning it into a large exhibition hall.

The CDAN, which depends on the Beulas Foundation, organizes visits in which, in addition to touring its exhibition halls focused on contemporary art, you walk around the surroundings of the building, which is perfectly integrated into nature and constitutes a work of art in itself. 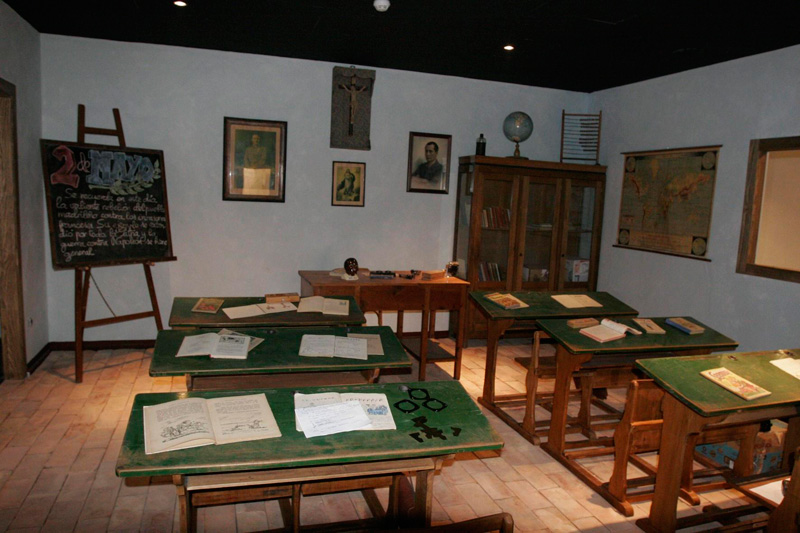 This center in Huesca collects materials and photographs that bear witness to the evolution of school and education in Aragon over the years to portray how society has changed.

Here you can find recreations of classrooms from the early twentieth century, books, maps, inkwells and even a school printing press. Materials that have been used in schools in recent decades.

As if it were an ethnographic museum, although focused exclusively on pedagogy and education, touring its exhibits allows you to learn about the evolution of the school and, by extension, of society.

Do you want to visit more museums in Aragon? Zaragoza has some of the best in the community, get to know them.

Teruel, a southern European province, taking off into the future

Laura Riñón: “The great enemy of books is not Amazon, it’s the screens”