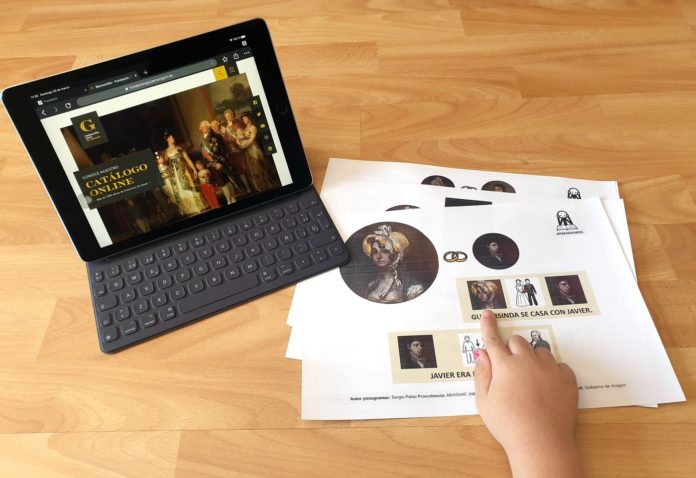 On the occasion of the 275th anniversary of his birth, the Goya Foundation in Aragon is working to publish the pictorial work of the Aragonese genius owned by the Prado Museum in a format adapted to pictograms.

It has always been said that Francisco de Goya is the universal painter and genius. Despite this, the work of the Aragonese painter was not accessible to everyone. His work is complex because Goya created communicative strategies and a language of his own to cope with censorship. He used resources such as allegory and ellipsis to spread his critical and committed message among society. Deafness also accompanied him for much of his life, a disability that led him to use art as a means of escape from isolation.

It is sometimes difficult to understand his painting if one does not have some basic notions, cannot access explanations in one’s own language, or has communication difficulties, cognitive problems, intellectual disability or autism.

This quest to make Goya’s artistic legacy understandable for everyone was what prompted the Fundación Goya together with ARASAAC (Aragonese Centre for Augmentative and Alternative Communication) to restore universality to the genius of Fuendetodos by making him accessible through pictograms.

Pioneering project in the world

The project consists of the publication of files on Goya’s works, extracted from the Foundation’s online catalogue and adapted to pictograms using graphic resources and materials to facilitate communication and cognitive accessibility for all those with difficulties in this area.

First the complete biography of the painter was adapted and then all the works in public and private ownership in Aragon, including such well-known canvases as Luis María de Borbón y Vallabriga and La letra con sangre entra in the Museum of Zaragoza, or the fresco of the Regina Martyrum in the Basílica del Pilar.

This is the first painter in the world to be made accessible on a large scale, or at least the only one to use, in addition to the open and free resources of ARASAAC (the pictograms), his direct advice. The Prado Museum is the only one that has used pictograms to make a work more comprehensible, and that was Velázquez’s Meninas.

The idea behind the project in 2019 was to extend accessibility to all of Goya’s works distributed around the world. Taking advantage of the 275th anniversary of his birth, the Goya Foundation is working to adapt the works of the Aragonese genius that are in the Prado Museum. The first files are expected to be available next April.

This is where the largest number of works by the Aragonese painter are kept. As so many of Goya’s works are exhibited and kept in the Prado Museum, ARASAAC thought that the best way to make them accessible was by sets.

“All the works will be adapted, but to give them a meaning they will be grouped according to themes or generic concepts. In other words, cards will be created by themes, such as tapestries, children or the two majas, which will be explained together. The aim of the adapted resources is to provide an understanding of Goya’s work in general and to create a resource that gives an overall view and does not become repetitive,” explains Belén Alcaine, an employee of the Fundación Goya.

The first resource in this new series of works will be a worksheet based on the group portrait The Family of Charles IV, which will be completed with individual portraits of each member of the family. There are several paintings of each of the characters represented in the Prado Museum to enrich the card.

Furthermore, the philosophy of the Goya Foundation in Aragon has been to work with the most representative works, but at the same time the most eye-catching and friendly. “These resources are also intended to be used in workshops with children in special education, so we want to avoid the most grotesque paintings,” says Pilar Domínguez, an employee of the Goya Foundation. Despite this, the series of Goya’s iconic Black Paintings will also be made accessible.

Find out all the latest news about Goya in Go Aragón.

Facebook
Twitter
Pinterest
WhatsApp
Email
Suscríbete a nuestro boletín
Artículo anteriorEstefanía Lacarte: “I always say that I am a Maña because it opens many doors”.
Artículo siguienteDavid Bernad-Lanuza: “In Spain people don’t drink much wine and that has forced us to export”

“Aragón abre camino”, shows Aragón as a gateway to the Way of St. James