Destilerías San Valero will invest more than €4.5M in its facilities

Marta Gastón and Joaquín Olona have visited the facilities of the Cariñena wine distillery, which is dedicated to transforming and revaluing the vinification by-products of almost all of Aragon's wine production. Economy will soon publish a new call for aids for business R&D in circular economy, in which Destilerías San Valero has been invited to participate.

Destilerías San Valero S.Coop. serves almost all the cooperative wineries in Aragon from Cariñena (Zaragoza), transforming and revaluing the by-products of winemaking. A pioneering and unique example of circular economy in Aragón for decades, which shares the objective of the Aragón Circular strategy: to achieve a more sustainable and efficient economic model in the use of resources, as was made clear during the visit that the Minister of Economy, Marta Gastón, and the Minister of Agriculture, Joaquín Olona, made to the plant on Tuesday.

Throughout its history, Destilerías San Valero has played a legal and environmental role in the management of by-products, improving year after year in their valorization through innovation, efficiency and the company’s quality policies. In order to continue growing along these lines, over the next three years, the wine distillery will invest more than 4.5 million in its facilities. 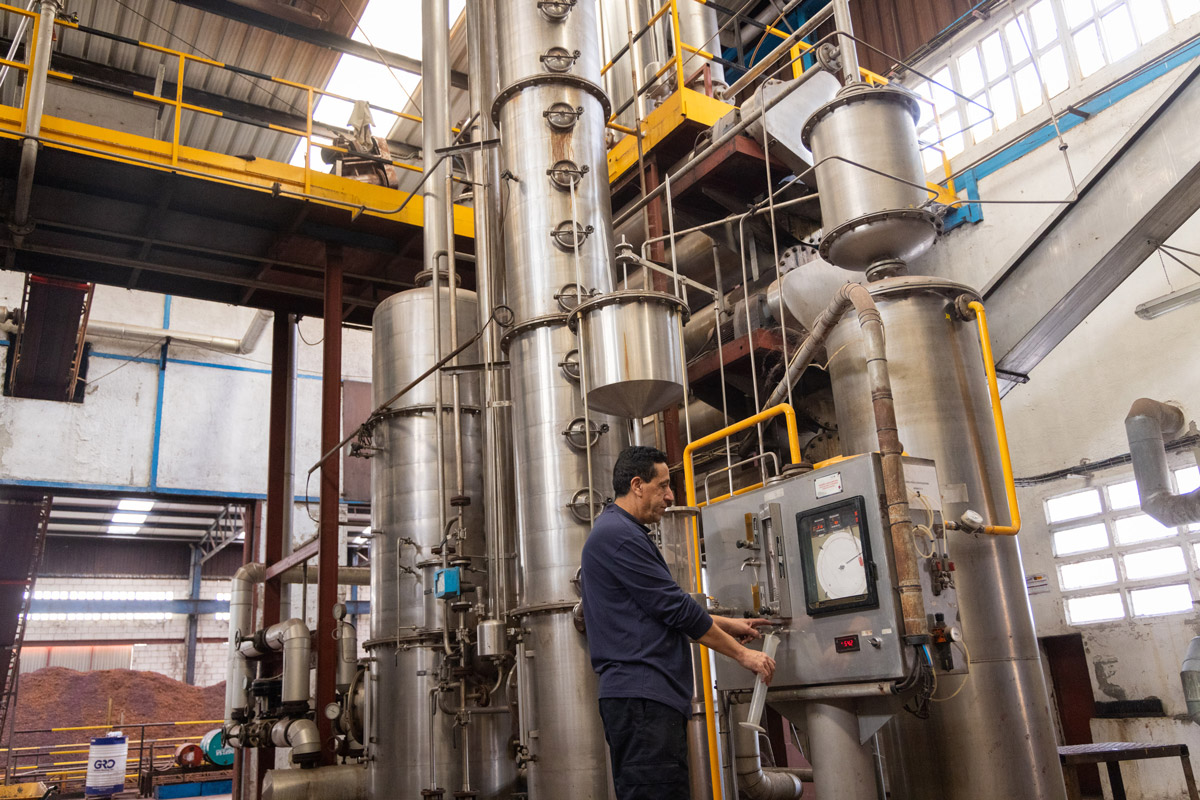 Destilerías San Valero, S. Coop. was founded in Cariñena in 1957 by the Cooperative Wineries of the area and nearby towns. The first facilities covered the most basic needs of the associated wineries, but little by little new works were added to obtain higher yields from the raw material received. The increase in the number of members and, therefore, in the volume of raw material, made it necessary to expand and modernize its facilities, which, thanks to the efforts and investments of the cooperative members, materialized in the current facilities dating from 1978.

This expansion fulfilled, besides its profitable aspect, the social aspect of creating new jobs which, undoubtedly, have had a favorable impact on the area.

It currently has more than 40 member wineries, as well as a large number of private wineries that also contribute their by-products, covering practically the entire wine production network of the region.

During the last few years it has not only modernized its facilities, but has also been able to adapt to new times and standards, marketing its products throughout Europe. So much so that, during the hardest months of the pandemic, they changed their usual production line to dedicate themselves 100% to the supply of hydroalcoholic gels, as was recalled by Councilor Gastón, who highlighted the commitment of this entity to diversification and internationalization.

For his part, Olona wanted to demystify the widespread idea that this type of plant only produces alcohol when, as he pointed out, this is only one of its many tasks. “From the by-product generated after the production of wine in the wineries, others of great wealth are obtained that allow the production of raw alcohol for bioethanol; the calcium tartrate is used in the pharmaceutical, food or textile industry; the grape seed is used to produce healthy oils and cosmetics or the production of natural organic fertilizers from its own residues. And, in the case of this wine alcohol producer, all this is produced using the energy of the by-product itself in its biomass boiler”, explained Olona. “In short, they manage to provide their partners with a value-added solution for their by-products, based on regulatory compliance, respect for the environment, innovation and quality service,” he added.

Destilerías San Valero is mainly engaged in the transformation of pomace, lees and wines from 45 member wineries. With these raw materials they obtain alcohols, tartrates, grape seeds, as well as other by-products valid for use as natural organic fertilizers. Their market is international and they mainly target the food and biofuel industries, where they work with national and international benchmark companies.

In recent years they have participated in European innovation projects such as the LIFE Program, where they were pioneers worldwide in the production of energy from hydrogen from residual alcohols. They have also improved the energy efficiency of the plant by improving processes, investing in renewable energies with the installation of solar panels. Always, without neglecting the environmental commitment, providing the distillery with a wastewater treatment plant to process its wastewater.

Facebook
Twitter
Pinterest
WhatsApp
Email
Suscríbete a nuestro boletín
Artículo anterior
IAC to build a second paint hangar at Teruel Airport and the creation of 150 jobs
Artículo siguiente
Joaquín Olona: “The most important thing we have are farmers”