Zaragoza presents ‘Zaragoza, the origin of a genius’ and puts its faith in Goya to promote itself at FITUR 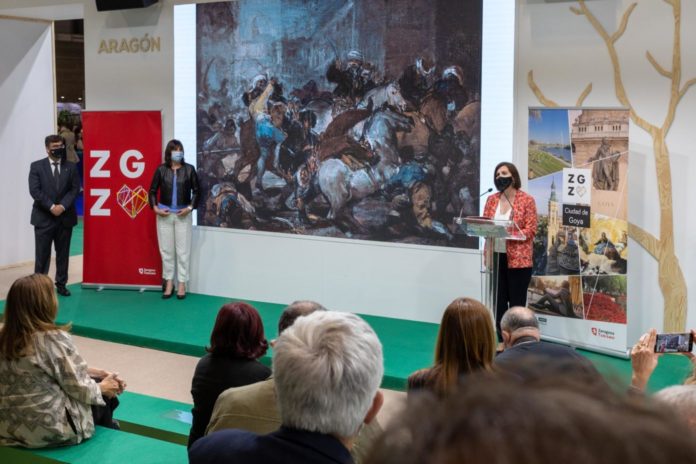 Zaragoza presented at the Aragon stand the Zaragoza proposal in terms of promotion and cultural tourism linked to the figure of the universal Aragonese painter.

Zaragoza is the birthplace of the most universal Aragonese genius and painter, this is the central motif of the Zaragoza – Goya promotion, on the 275th anniversary of his birth. Francisco de Goya, born in Fuendetodos, was educated in the Aragonese capital, where the artist’s vital and pictorial imprint can be found.

Zaragoza is dedicating the stand located within the Aragonese Government’s space to Goya, “one of the city’s greatest attractions in terms of external projection and tourism” as reflected in the SWOT study commissioned by the City Council, commented the Deputy Mayor, Sara Fernández, at the presentation of ‘Zaragoza, the origin of a genius’.

“Associating the city’s image with Goya is one of the greatest opportunities detected and we will not be the ones to lose it. We are working to turn Zaragoza into a pole of tourist attraction around his figure, highlighting all his potential”, he pointed out.
Without the Aragonese capital, a large part of Goya’s work would not be understood, because his childhood, youth and training, as Fernández recalled, took place in this city, which “saw him grow up and which marked his character”.

On the 275th anniversary of his birth, the city will host an extensive programme around his figure. In June, the Tapas Routes will begin in collaboration with the Association of Cafés and Bars, a cultural tour of establishments near the places where Goya lived or where his work can currently be seen. In addition to this hotel and catering offer, new tourist routes will be created to show not only Goya’s artistic legacy, but also his origins, in order to discover the beginning of his artistic career.

The cultural programme will be completed with the street play ‘Los disparates de Goya’, a show directed by Sergio Muro and Joan Pascual that mixes dance, poetry, humour and music, and ‘Los 3 tontitos y Goya’, an initiative that will analyse a painting by Goya.

Exhibitions will also be a fundamental part of this initiative. This summer, ‘El cómic y Goya, una muestra de veneración’ will be on display, reflecting the influence of the Aragonese genius in this discipline and, in autumn, there will be a reinterpretation of his works by Aragonese artists.

Finally, the City Council will publish the comic ‘The History of Goya’, a work by Bernal, Jorge Asín and Juan Royo, with the aim of allowing schoolchildren to discover the adventures of the painter and his vision of the world and Zaragoza.

In addition, this year the Goyesque Week will be given greater impetus. The Chamber of Commerce, in collaboration with Zaragoza City Council, is working on expanding the programme with the aim of bringing the figure closer to the city and making this event an international reference point.

All these activities have a vocation for continuity and, with the aim of expanding them next year with exhibitions in La Lonja that will combine original works with new technologies to “bring the work and the figure of the Aragonese genius closer to the people of Zaragoza and visitors”.

For Zaragoza City Council, “Goya is a city project”. “We want Zaragoza and Goya to be permanently linked, giving the city the personality and the national and international appeal to be considered, once and for all, as Goya’s city”, he concluded.