Antonio Gutiérrez: “Martial arts are falling into disuse, they are not encouraged”

Antonio Gutiérrez is sensei (master) of Kendo and Iaido, two Japanese martial arts in which the art of the katana is combined with the moral strengthening of the human being. He is one of the seven Europeans who boasts in his record of 7th Dan in Kendo, the second highest degree of the discipline, and 7th Dan in Iaido. 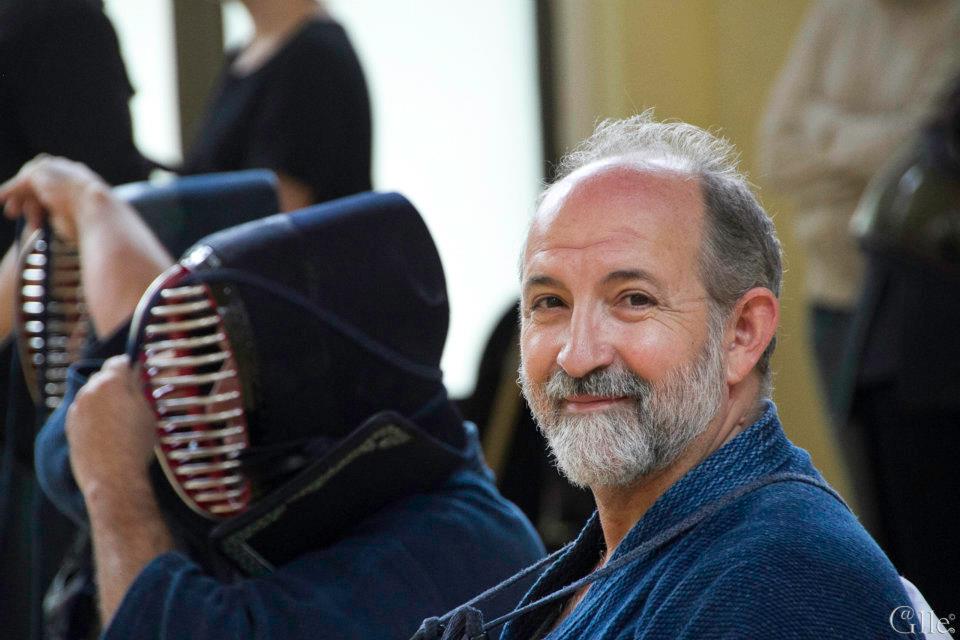 Antonio Gutiérrez ventured into the world of martial arts more than 40 years ago. In love with Kendo and Iaido, two centuries-old Japanese disciplines, he has become one of the most respected Senseis (masters) in Spain. Competitions, seminars and championships: a whole life dedicated to the handling of the sword and whose effort has already been fruitful. In recent years, he has achieved the 7th Dan in Kendo, the second highest degree of the discipline, and the 7th Dan in Iaido. He is the first European to achieve these titles at the first time, and one of only seven European athletes to hold both levels. To this day, he continues in his tireless struggle to surpass himself.

From his temple in the Kanku Cultural Sports Association in Zaragoza, Master Antonio Gutiérrez teaches and prepares his beloved kendokas to prosper in the discipline. This is reflected in the Kanku emblem CHIKA MICHI NASHI, “there are no shortcuts”.

You have a lifetime of sacrifice dedicated to the martial arts, which ones have you practiced throughout your life?

Sacrifice would not be the word. I have been dedicated to martial arts for a long time, loving and enjoying them. I started doing Judo when I was very young, then I switched to Karate because it began to develop in Spain. I was very attracted to it and I spent 20 years practicing it. From there, and simultaneously with Karate, I was doing Aikido for three years. But at that time, I had a crush on Kendo. There was a Kendo championship in Zaragoza before the 90’s, it attracted me a lot and I wanted to start practicing it. I left Karate and everything else to dedicate myself completely to practice Kendo. Soon after, I started with Iaido, both things complement each other very well. And so on until today. I have been practicing these disciplines for more than 40 years, but always enjoying it. 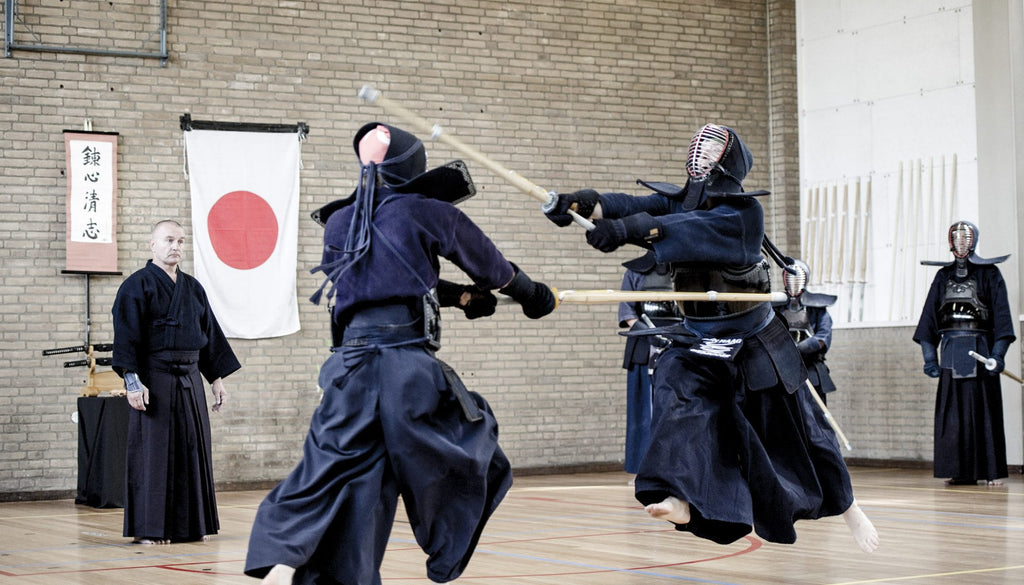 Its name is the handling of the sword. It is composed of two ideograms 剣 (ken: sword) and 道 (do: way, path). I like the definition in the Japanese Kendo Federation and the International Federation: “It is to discipline the human character through the practice of the principles of the katana: it is to mold the mind and body, cultivate a vigorous spirit and through correct and rigorous practice, strive to improve the art of Kendo, appreciate human courtesy and honor, relate to each other with sincerity and always pursue self-development. Thus one will be able to: love one’s country and society, contribute to the development of culture, and promote peace and prosperity among all people”. Basically, it is about practicing, practicing and practicing, and working, working and improving. Striving to know that you can do things. It is done with a bamboo sword (shinai) and a protection called bogu. Techniques are not marked, it is a fight for life or death.

It is another part of Kendo. It is worked with a sword, in this case similar to a katana, but practice and blunt. Kendo and Iaido are two disciplines that complement each other well. In Iaido you handle the katana in the air in certain situations called katas. And in Kendo you do it with a partner.

What were the reasons that led you to choose the practice of martial arts?

At that time of youth, I was very attracted to that part of mobility, harmony, development and work with the sword. With time you realize that there is something else, something that motivates you every day: to improve yourself. That is the essence. And enjoy. Enjoying your activity and your teammates, creating that harmony with them where you fight to the death and the next moment you are hugging and commenting on the play.

What do the disciplines contribute to both your physical and mental state?

Above all, it is the situation of personal development with oneself. Physically, it makes you coordinate your whole body very well, you look for a very balanced and harmonious position, natural, round and circular movements. All this makes your body thank you, your back works better, the stability of the hips … you have a posture that facilitates your daily life. This develops little by little and helps concentration.

A few years ago you obtained the 7th Dan in Kendo or “Nanadan”, the second highest degree that can be obtained in the discipline through official exams. What does it mean to you?

Actually, not much. What matters are all the years I have been working, dedicating myself to this and sharing it with all my students. Personally, I am not very fond of enjoying triumphs or failures. Neither when I win am I better than yesterday, nor when I lose am I worse than yesterday. On a personal level I have come this far, but I want to achieve more.

Unlike other martial arts, in Kendo there are no visible signs that indicate a person’s rank as is the case with Karate belts. Apart from this observation, why is Kendo special?

Fundamentally it is the work of the distance of the sword. The handling of the sword makes it different from other martial arts. Otherwise, it shares many other things in terms of discipline, work, constancy, perseverance, concentration, sense of the instant, guessing the opponent’s response, etc.

What is the level in Aragon?

Aragon has a great level in Kendo and Iaido. In Kendo over the years it has won very important titles: Spanish championships, individual, team, third place, second place, etc. The level is very high. In Iaido, the Aragon team came third. The last championship held before the pandemic, Blanca Diego, representative of Zaragoza, was champion of Spain in the 3rd Dan category. This year she will revalidate her position in a month and take the 4th Dan exam. Therefore, the level is frankly good and we expect to bring some Spanish champion this year.

In Spain, internationally and in terms of European championships, it has an important level, both in Kendo and Iaido. In Kendo there have been European champions, right now it is one of the feared teams, both in women’s and men’s Kendo. The development of women’s Kendo has been spectacular, as in Iaido men compete against women, the only difference is that it is done by grades. There have been two European champions, a second place in a team championship… the level is quite good despite the few practitioners and the few licenses that we currently have. It must also be said that we have good masters.

What future do you foresee for martial arts in our country?

It seems that they are falling into disuse, it is easier to practice something with the ball and has more subsidies. These things are encouraged from childhood, it is a good job. The martial arts are not promoted too much, in general. Kendo and Iaido are not practiced by children. When people are older they start practicing them. And if they do it is because a friend tells them about it or they see something on Youtube. They are minority things, although that does not mean that anyone who enters there, gets the bug and remains linked for life.

Given this situation, how do you think the knowledge and practice of martial arts could be promoted?

What would you say to someone who is thinking of starting in this world?

Don’t delay, take advantage of it. Time goes by and in life you have to do what you like. If the world of swords has caught his attention, he should take one and come to practice. Do not be discouraged by age, I still see myself young with the sword and there is no one to beat me. Still. It is never too late, it is always possible to learn anything in life and, with the sword, much more.

Facebook
Twitter
Pinterest
WhatsApp
Email
Suscríbete a nuestro boletín
Artículo anteriorZaragoza’s Forest: one of the most ambitious European projects of urban reforestation
Artículo siguienteWhat to do on the Aragonese ski slopes when the snow disappears