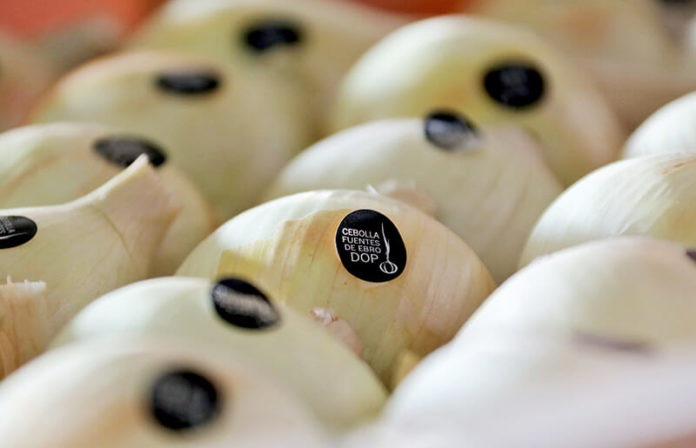 Cebolla Fuentes de Ebro DOP is the only onion with Protected Designation of Origin in Spain. This season, which starts now, they expect to harvest about five million kilos until December.

It is one of the most recognized Aragonese foodstuffs and in about two weeks it will start to be harvested. Soon we will be able to enjoy again the Fuentes de Ebro onion, which is distinguished from the others for being soft, juicy and crunchy. Its flavor and organoleptic properties are appreciated both inside and outside Aragon, and many travel every season to France and Italy, the main importing countries. It is important to remember that this is the only onion in Spain with the Denomination of Origin quality seal.

According to the president of the Protected Designation of Origin, Jesús Berdusán, this season they expect to harvest around five million kilos. This figure is similar to that of previous years because, as he explains, they want to adapt to demand to avoid overproduction. They know they have room for growth, but they prefer to follow the needs of the market.

This season the PDO has 100 hectares, a figure higher than last year, spread over the six municipalities where the variety is produced (Fuentes de Ebro, Mediana de Aragón, Osera de Ebro, Pina de Ebro, Quinto and Villafranca de Ebro). All of them share the microclimate that gives the Fuentes de Ebro onion its qualities, and also have in common the objective of keeping the product in the consumer’s mind all year round, something they recognize is complicated given its seasonality, as it can only be found in kitchens and on tables between the months of July and January.

With the start of the campaign will also come promotional activities. This year, as Berdusán explains, the strategy will be similar to that of previous years, with presence in different promotional events and sponsorship of events such as popular races or other sporting events. There will also be an emphasis on activity in social networks and advertising in the media, as well as posters at points of sale where authentic Cebolla Fuentes de Ebro is offered.

As always, from the PDO insist the consumer to make sure they are buying Cebolla Fuentes de Ebro and avoid confusion. “You have to look for the logo and the label, it is not enough with a sign indicating that it is this variety,” Berdusán points out. He clarifies that, on occasions, many sweet onions that are not part of the Denomination are called “Fuentes onion”. Only the logo and the label guarantee that the product has been grown and harvested following the quality standards set by the Protected Designation of Origin.

Jesús Berdusán took over the presidency of the PDO last April, replacing Daniel Molina, who had been at the helm for the past eight years. From the beginning he promised a “continuist” mandate, with a project that shares the same objective as the previous one: “to consolidate the name of Cebolla Fuentes de Ebro and help the consumer to differentiate it from the rest, putting the quality brand above all else”. An objective that will once again guide the actions of the appellation in the new campaign that begins in a few days.

More than eleven years of Protected Designation of Origin
Cebolla Fuentes de Ebro has been cultivated in the area since the 11th century. It obtained its official recognition as a P.D.O. in May 2010 and in 2013 it was registered in the European Union’s Register of Designations of Origin. Before that, already in 2005, the Association for the Defense of the Fuentes de Ebro Onion was created, the germ that gave rise to the current figure of protection.