From private collections, they will be placed next to works from the 19th and 20th centuries on the third floor dedicated to Goya's legacy, which reflects the permanent trail of the Aragonese painter in later art. By Francisco Pradilla, Odalisca, an oil on canvas, and Penitente, a watercolor on paper, will be exhibited, in addition to the paintings Marquesa de Luján, by Pedro Kuntz y Valentini; Fiesta de Disfraces, by Emilio Sala, and Sol y luna, by Mariano Alonso Pérez y Villagrosa. 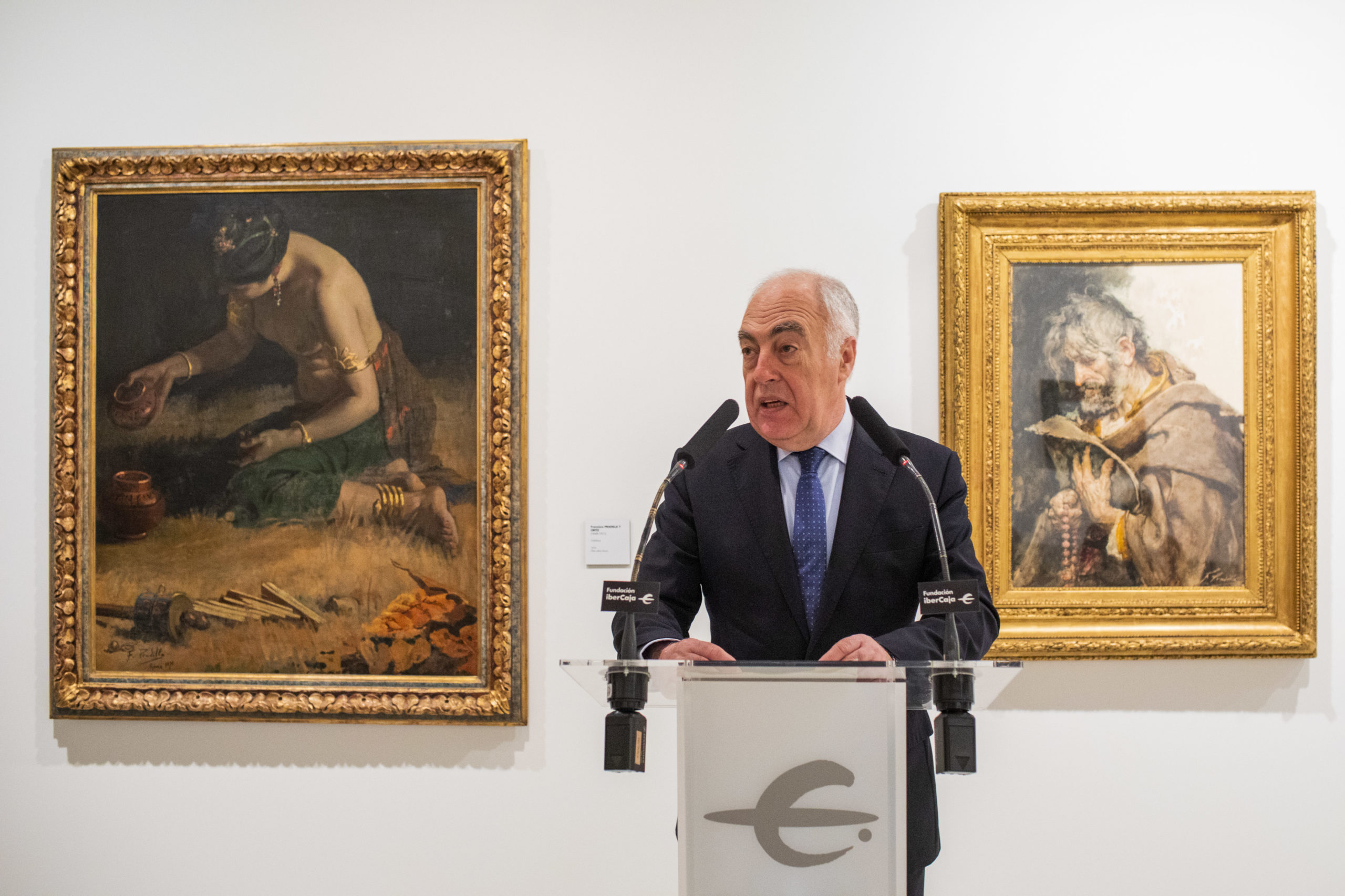 The Goya Museum is one of the museums you must visit if you come to Zaragoza. If you want to know his work and his influence on later painters this museum is a must.
It has recently added five more works to its already extensive collection.

Five works by Francisco Pradilla, Pedro Kuntz y Valentini, Emilio Sala and Mariano Alonso Pérez y Villagrosa, from private collections, will be added to the permanent collection of the Goya Museum of Fundación Ibercaja. They will be located in the third room, dedicated to the legacy of the Aragonese painter and his influence on art, which brings together paintings and sculptures by artists of the 19th and 20th centuries.
The presentation of the paintings was attended by José Luis Rodrigo, general director of the Ibercaja Foundation, and Rosario Añaños, director of the Goya Museum.

Francisco Pradilla’s Odalisca, an oil on canvas, and Penitente, a watercolor on paper, will be exhibited. By Pedro Kuntz y Valentini, the portrait Marquesa de Luján; by Emilio Sala, Fiesta de Disfraces, and by Mariano Alonso Pérez y Villagrosa Sol y luna, all oil on canvas.

Five paintings framed at the end of the 19th century and the beginning of the 20th century.

The turn of the century marked a transition for Spanish painting that forged a new artistic personality and introduced a range of pictorial genres that brought freshness to the peninsula through artists such as Pradilla, Barbasán and Fortuny.

From the unpolluted sobriety of the portraits of Pedro Kuntz and Valentini, to the taste for classical mythology as we see in the work of Alonso Pérez, Spanish painting underwent a process in which it was nourished by other cultures, as Europe opened up to foreign influence that would bear fruit such as the Odalisque of Pradilla and other artists who would find in orientalism a freshness never seen before in the Spanish context. Together with the plastic fluency offered by the vibrant brushstrokes introduced by Goya in the previous century, it gives way to the new Spanish plastic art of the twentieth century.

Among the five works is Odalisca, painted in 1876 by Francisco Pradilla, one of the best Aragonese painters after Goya’s death, who stood out for his historical paintings, as well as landscapes and genre scenes, framed in his personal pre-impressionist style. It is an oil on canvas measuring 112 by 89 centimeters that has been acquired by Fundación Ibercaja from a private collection. It is related to other paintings of oriental inspiration, especially Danza de odaliscas (Dance of Odalisques), painted in the same year. In this painting, an odalisque is represented in a nocturnal environment. Adorned with bracelets, slaves, anklets, earrings and jewelry in her hair, the protagonist is shown seated on a cloak of straw grass with her torso naked, pouring a liquid or ointment from one ceramic vessel to another. This is a unique scene, as the musical instruments depicted are unusual in European painting of the period.

The painting Penitente, also signed by Pradilla in 1901, is a watercolor on paper measuring 73 by 52 centimeters. It is part of a personal collection that was intended to gather paintings that showed the painter’s skill with techniques beyond oil painting. This watercolor shows the profile of an old man dressed in a worn tunic, holding his hat with one hand while he feels the rosary beads with the other. Pradilla magnificently captures the physical features while making a surprising psychological penetration. 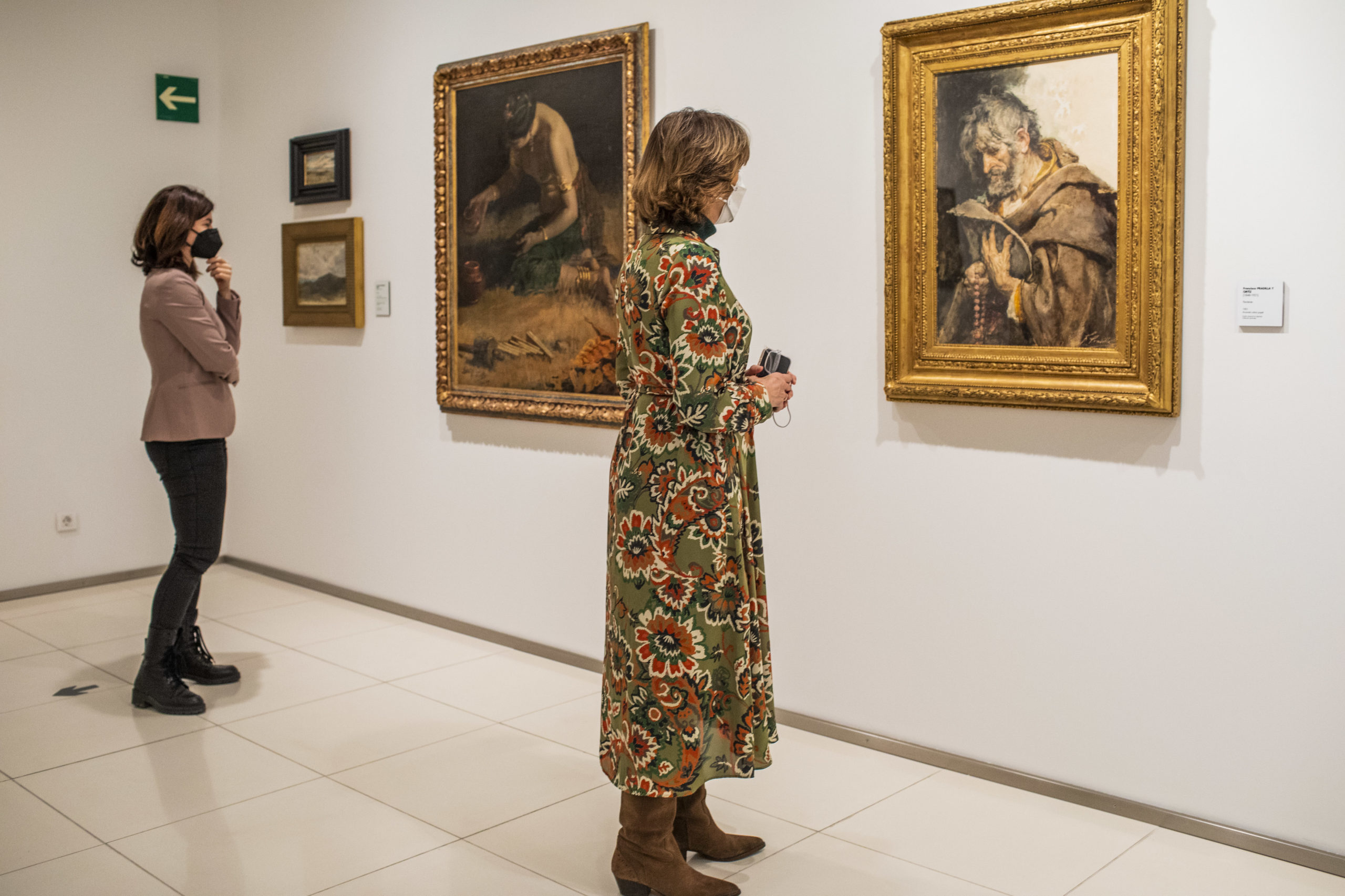 Pedro Kuntz y Valentini’s oil on canvas of the Marquesa de Luján, painted in 1852, measuring 212 by 113.5 centimeters, is included. The Italian painter was famous for his architectural and interior perspectives, especially those he painted in the monastery of El Escorial. In this work, the Spanish aristocrat can be seen standing, full-length, in a sober black silk dress with a tight bodice and wide flared skirt, adorned with a collar and white lace sleeves. It is part of the multiple portraits that during this period were made for the aristocracy. 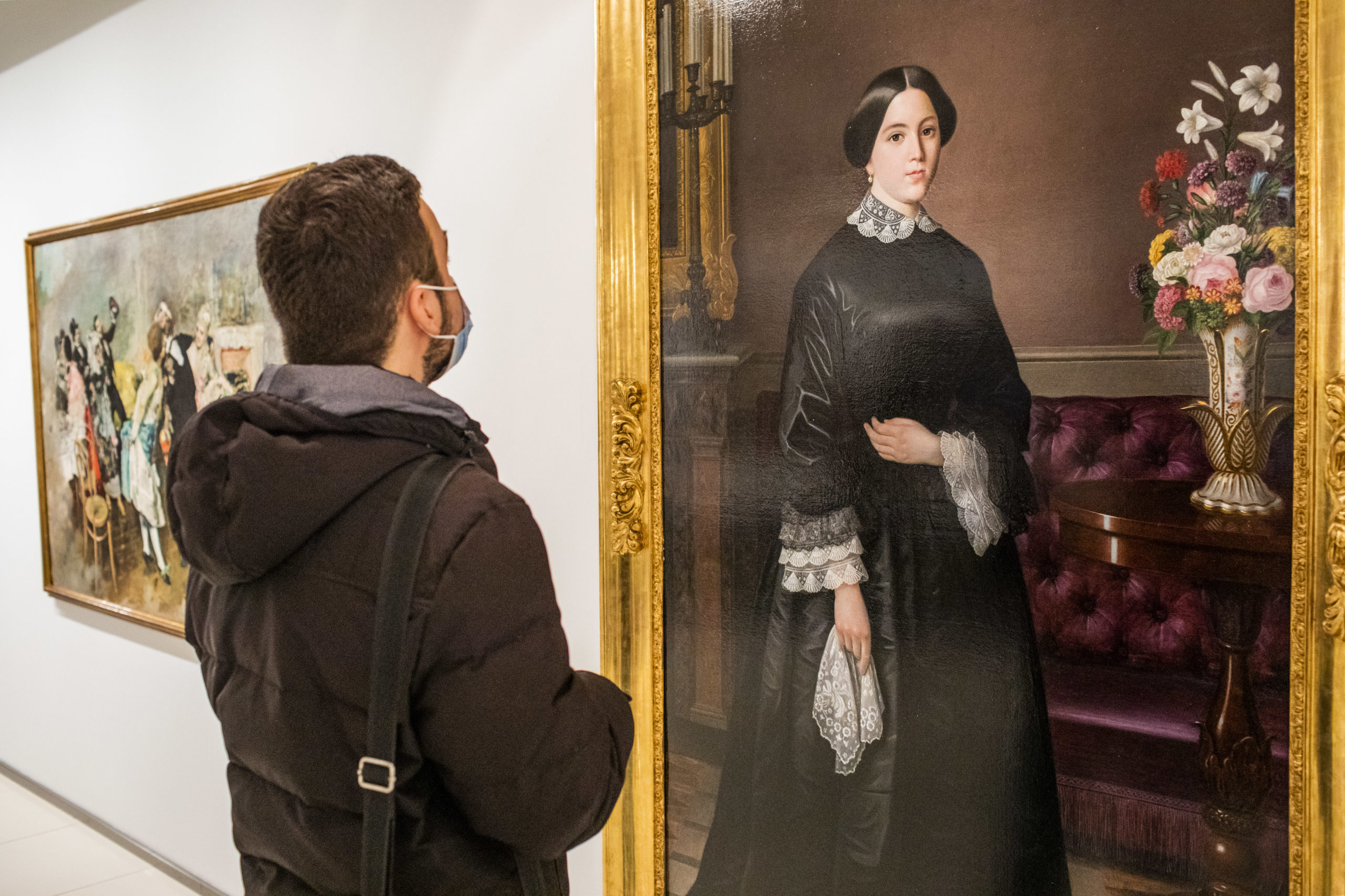 The painting Fiesta de Disfraces was painted in 1876 by Emilio Sala. It is an oil on canvas measuring 122 by 190 centimeters. It is part of a long series of paintings that the artist from Alicante developed as part of a genre that included the mural decoration of private residences and public buildings. This type of work shows originality, efficiency, decorative simplicity and brilliant intonation.

The set of these five works is completed by the painting Sol y luna (Sun and Moon), by the Zaragozan painter Mariano Alonso Pérez y Villagrosa. It is an oil on canvas measuring 163 by 118 centimeters and dating from 1906. It represents the caress between Helios (god of the sun; charioteer accompanied by bright rays of sunlight made by light brushstrokes) and Selene (goddess of the Moon; next to a quarter moon that identifies her on her chariot pulled by winged nymphs, who carry a dark veil, similar to a starry night) and that takes place in a golden dawn, the only time in which these two characters could be seen.
With the addition of these five paintings, the Goya Museum treasures a corpus of 521 works on display to the public, thus fulfilling its vocation of being a living museum, dedicated to facilitating the knowledge and dissemination of culture and art, as well as the work of the genius of Fuendetodos and its antecedents and precedents in the history of painting.

What is Go Aragón?

Zaragoza’s transport will be 100% electric, minimalist and more spacious: Present the ‘ie tram’