Get ready to discover the seven castles of Aragon where the Knights Templar were present between the 12th and 14th centuries. Visiting these places is a journey through the history of Aragon and the military and political movements that took place during this period. 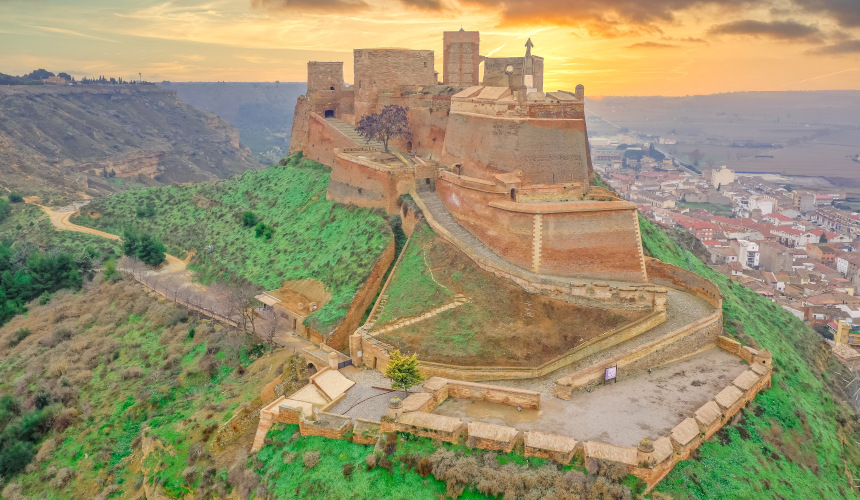 The Order of the Temple was one of the most powerful and influential military monastic orders of Catholicism in the Middle Ages. It originated in France, but spread throughout much of the world, partly thanks to the crusades and its support to different monarchies. One of them was the Aragonese, so the Knights Templar had an important presence in our Community. Given their status as warrior-monks, it was common for them to be given castles from which they collaborated in the defense of the territory. Today we propose a journey through the Aragonese fortresses where they were present; many of them are only ruins and others have already disappeared, but their stories leave evidence of the Templar presence in Aragon.

This fortress is of Muslim origin, but, after being reconquered, it was ceded to the Order of the Temple in 1143. They added walls, towers, stables, a refectory and dormitories to turn it into a barracks. A transformation that can still be appreciated in the visits to the castle. You can tour all these rooms and see inside, for example, the Tower of James I, the place where the young prince lived while he was trained by the Knights Templar as one of them, until, at the age of 9, he had to leave the fortress.

After the order was declared outlawed in the early 14th century, the castle held out thanks to its strategic location and the ease of defending its walls, but the defenders finally surrendered the square on May 24, 1309.

As the most important place for the order in our Community, and the best preserved, the interior of the castle houses an interpretation center dedicated to the Templars.

Its current state is ruinous, but its view is still impressive. It has a height of 15 meters and walls over two meters thick. You can make the circular route around Chiriveta, of short duration and little difficulty.

It is a building of Visigothic origin that the Templars adapted for use as a fortress, and that can no longer be seen because it was completely destroyed. It was the last one they surrendered after being condemned by the Pope, and with its assault ended the presence of the Order of the Temple in Aragon. Precisely because it was their last building, it was completely demolished once conquered and now only the land on which it stood can be seen.

The first thing that stands out about this castle is its strategic location, at the top of a ravine, adapting its shape to the terrain, something that favored its defense and its function to guard the border between the kingdom of Aragon and the Muslim territories of Valencia. Today only part of the wall and the tower of the vertex remain, which in Templar times had a triangular base but in the nineteenth century was used to build a hermitage with a cylindrical base.

From its plan it is easy to imagine how it was its site, forcing the attackers to advance through a single point, where to concentrate the defensive emplacements. The knights of the Order of the Temple resisted the siege of the troops of Berenguer de Tobía for eight long months.

The castle of Castellote was one of the great Templar fortresses, with a large arsenal and a lot of livestock activity. Many of the provisions that allowed the order to undertake overseas campaigns were kept here.

Despite its importance, only the remains of the chapter house, the keep, some cisterns for water supply and part of the original walls are preserved today. In its day it was accessed via a drawbridge, but today it can be reached on foot, albeit after climbing a considerable slope.

Another castle erected to safeguard the border with the Levant; in fact, according to legend, this is where El Cid recovered from wounds suffered in a battle in Albarracín. It is the oldest building in Villel, and forms part of its coat of arms. Its most characteristic element, and one of the few still standing, is the keep.

In addition to the obvious historical value of its architecture, this fortress houses an archaeological treasure: the incised drawings made on its walls by some of the soldier-monks belonging to the Order of the Temple. Images that represent a graphic document of their life and the instruments they used.

This castle was reconquered from the Muslims in 1169 and five years later it was ceded to the Order of Monfragüe, which would eventually unify with the Order of the Temple. The place became one of the most important fortifications in southern Aragon. A century later, Templar records showed that the fortress had almost 700 head of cattle, which gives an idea of its importance for the order.

Its remains have an elongated floor plan and only the base of a large tower 14 meters long by 7 meters wide is preserved.

Did you want more? We recommend 8 castles in Aragon that you should not miss.

Facebook
Twitter
Pinterest
WhatsApp
Email
Suscríbete a nuestro boletín
Artículo anteriorSofía Temprado: “Digitalization is not just about putting a digital tool in front of a teacher, you have to certify their skills”
Artículo siguienteIdoo Tech, a commitment to integrate the Apple brand in the business sector