Coinciding with the celebration of the fifth edition of Goya Week, Zaragoza City Council highlights the influence that his time in the city had on the painter, and how this period contributed to his becoming a universal genius. 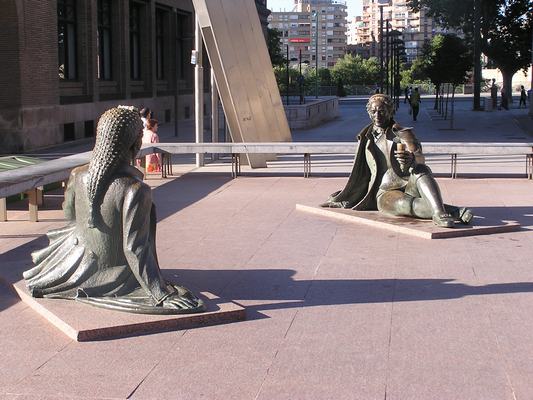 The years that Francisco de Goya spent in the Aragonese capital served to define his art and forge his character, which is why his figure will always be linked to the city. This is how Zaragoza City Council understands it and that is why they want to highlight this relationship in order, for example, to attract visitors who want to familiarise themselves with his work. According to the Deputy Mayoress of the Aragonese capital, Sara Fernández, the objective is to “link the name of Goya to the image and external projection of the city”, an idea that the manager of Zaragoza Tourism, Conrado Molina, agrees with: “Francisco de Goya has lived our streets, our culture, our gastronomy… and he would not have been who he was if he had not done so”, he says to Go Aragón.

They believe that the figure of the painter could be vindicated from Zaragoza much more than has been done so far and that getting the city to identify with him is a challenge worth facing: “The citizens will take him as their own and we will continue to generate activities related to him, which are always very well received”, adds Molina.

Activities such as Goya Week, which this year celebrates its fifth edition and will be held between 17 and 26 September in Zaragoza and Fuendetodos, his birthplace. Both towns will offer activities in schools, exhibitions, guided tours and workshops on the artist to raise awareness of his figure on the 275th anniversary of his birth. In addition, the traditional Aguja Goyesca designer competition will once again be held, with creations inspired by his work.

However, the link between Zaragoza and the painter aspires to become a permanent tourist attraction that takes root as part of the city’s cultural, artistic and tourist programme and transcends the official celebrations. For this reason, activities are offered throughout the year, such as the recently inaugurated route that covers the buildings linked to his stay in the Aragonese capital. In this way, by getting to know the steps he took through its streets, Zaragozans and above all visitors will internalise the importance that these had in the development of the painter’s personality and art.

With all this, Zaragoza aspires to become ‘the European capital of Goya’, something that is not intended to make us forget the relationship he had with other places, both in Spain and abroad, but to vindicate the importance that the city had in forging his universal figure.

You don’t have to go far to find cities and towns that share the aim of recognising the figure of Goya and claiming their relationship with him as a tourist attraction, an effort that is being promoted by the Government of Aragon, as explained by the Director General of Tourism, Elena Allué: “We want to promote and work to make it an emerging tourist product, one that will remain over time, and to this end specific tourist routes will be organised, which will cover a journey from the birth to the end of Goya’s days, passing through different Aragonese towns, where his works or part of his life remain”.

According to Allué, the Chamber of Commerce is already working on a study that “will be translated into routes and a website with trips that could be offered to large agencies“. All this to turn Goya into a symbol “that will serve to identify and promote our Autonomous Community in the world, taking advantage of its international repercussions”.

Facebook
Twitter
Pinterest
WhatsApp
Email
Suscríbete a nuestro boletín
Artículo anteriorWhat to do and see in the most beautiful villages of Aragon?
Artículo siguienteGoya’s paintings will come to life this Sunday in Zaragoza’s Plaza del Pilar, as part of De Goya Week

What is the Vive Latino? the most imprint festival of Latin music