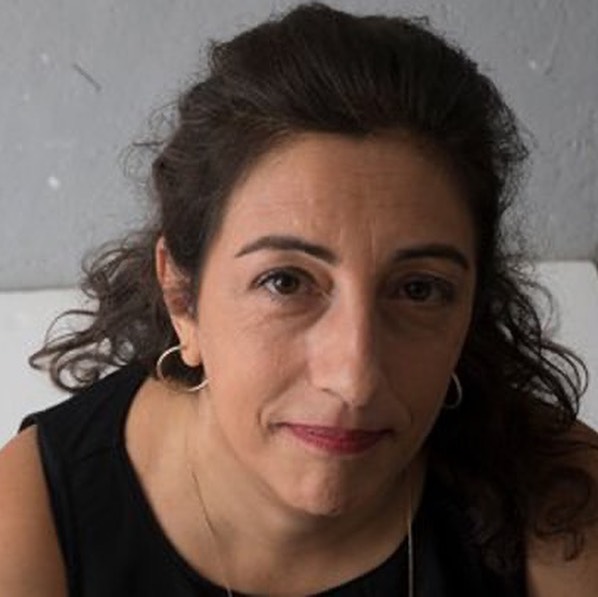 The writer María Frisa is the author of around twenty books for adults and young people. Humour is the protagonist of most of her works, although crime novels are another of her passions, along with children’s and young people’s literature. She will be present at the Zaragoza Book Fair 2021.

María Frisa, it says on your ID card that you were not born in Zaragoza, but you consider yourself to be from here.

I was born by accident outside Zaragoza, but my family is from Huesca and Zaragoza and I consider myself from Zaragoza. My parents got married, my father was a civil servant and they went to live abroad and while I and my brother were born. I was born in Barcelona by accident. But I came back when I was three years old and I’ve lived here ever since.

What made you start writing?

The truth is that I started quite late because I was 28 when I started writing. I think that many times in life it’s the moment to say: What if I tried? And in my case it was when I was 28. I had never written before, nor had I thought about it. I studied Psychology and Social Work, not Hispanic Philology, but I have always been a reader. When I was 28 I finished reading a book and I thought: “If I start, I’ll do it too”. It was a book by Fernando Schwartz.

And you took the plunge.

When I talk to children I always tell them that sometimes we don’t do things because we are afraid, embarrassed… and that we have to do them, we have to try. It’s like training in a sport, at the beginning it’s not easy. I give you the example of running, that as you continue and practice it, you run better and faster. With hard work and desire you get there. Writing is also like that. At the beginning I lacked resources, I lacked technique, but over the years you learn.

Living in Zaragoza, there weren’t many publishing possibilities at that time either, as online publishing didn’t exist yet. I applied for a literary prize, one here in Zaragoza. It was a literary prize for a short novel and I sent it in and won the prize, which included the publication of the book. With that book published, everything became easier. Then I continued to participate in literary prizes for many years. I began to publish nationally in Martínez Roca (Grupo Planeta) for many years and little by little I thought about writing for children and young people, which is when I launched the series of 75 tips, which has been my biggest bestseller.

How did the idea of creating this series for young readers come about?

I had always written for adults and I always said that I would never write for children and young people. At that time I had an 11-year-old daughter who, when she came home from school, would tell me all sorts of things and I thought: I can write a book with this. I tried, I gave myself a month to see if I felt comfortable. It’s true that when I thought of this type of literature for children and young people, I thought of science fiction or medieval literature like the Chronicles of Narnia, Harry Potter… and I didn’t see myself capable of doing that kind of work, but I did see myself capable of writing along the lines of what I was doing for adults, with a good sense of humour.

What was it like when you received harsh criticism and you were accused of encouraging buying and machismo with the book of 75 tips?

It was the most difficult and unpleasant moment of my entire career. It bordered on surrealism. The book had been published for years when it happened, I had given 300 talks in schools and institutes all over Spain and nobody had ever said anything to me. The children understood that the advice was not real, that it was a book of humour and the children laughed a lot and they all recognised themselves very much in the humorous stories. It came about because of a character who wanted to become famous at all costs and saw that he had a vein there. Many journalists and writers came to my defence. The turning point was the articles by Elvira Lindo in El País and Fernando Aramburu in El Mundo. Sergio del Molino also wrote another article defending me. If this had happened as soon as the book had been published, yes, I would have felt that the message being conveyed by the book was wrong or could have been interpreted in another way, but with all the time it had been published….

Is it better to write for adults or for children?

It’s very different. For children, the books I write are humorous and I have a lot of fun, I laugh a lot doing it. The bits that I laugh the most when I write are usually also the ones that make children laugh the most. But I believe that not everything can be written in children’s and young people’s literature, there are themes that have to be adult literature. For me, adult literature is more technically demanding in terms of language, the structure of the novel… it’s totally different. I like both things very much, but writing for adults is a bigger challenge.

Which of all your books would you choose?

I suppose if I had to choose one, it would be 75 Tips for Surviving School, which was the first of the whole series. It has been translated into Chinese and many other languages and has been sold in many, many countries. It is very gratifying how many children told you things about the book, the excitement you saw in the talks… and there were many children who told you that they had read a book without being forced to. The contact is very different with children than with adults and if they don’t like it they tell you so. They experience everything more intensely, I have even seen children trembling and crying at the thought that they were so close to me. It was very rewarding.

What are the issues that you say need to be dealt with in adult literature?

As you get older you realise that every life has its share of misery and greatness, and I like to write, sometimes, about that part of misery. When you’re a teenager or a child you can’t understand it.

And you have chosen the situation of women.

I collaborated with Heraldo in a series of articles in which I wrote about how women and literature are the most disadvantaged. I think we have to be named, above all, in crime novels. It seems to me that the crime novel is the most sexist genre that exists. In its origins women always had three women and I think that enough years have passed for this to continue to be the case, we have to evolve and we have to be the protagonists of the stories, we can’t be mere extras. I want to give prominence to women, the prominence we deserve. We are not a collective, we are 50% of the population. In literature, especially in black literature, we tend to think that the masculine is universal and the feminine is particular.

If you had to name your favourite Aragonese authors, which one would you choose?

This question is wrong because you always leave some people out. I would choose Carlos Castán, who is the master of short stories, not only in Aragon, but also in Spain, and Irene Vallejo, who is taking Aragonese literature written by women to a global level.

Does Zaragoza inspire you as a city to write?

It’s my city and I love it very much. It makes me very angry that when you go out in Madrid and Barcelona they tend to look down on it and only say that we are nice and stubborn. There is still the cliché that we are all Marianico el Corto, and Zaragoza is not only El Pilar and El Tubo. When I wrote the novel Cuídate de Mi I wanted Zaragoza to be the protagonist of the book, and the city is just as much the protagonist as the two policewomen. I wanted you to see a different Zaragoza, which those of us who live here know perfectly well and enjoy it… The banks of the Ebro that are so beautiful since the Expo, the square and the Magdalena tower. The Gender Violence Unit, which at that time was in the Plaza Huesca, also appears, and that environment is very much in evidence.

When can we see you at the Zaragoza Book Fair 2021?