From the Bridge Pavilion to the Solo Houses: the most recognized architecture in Aragon 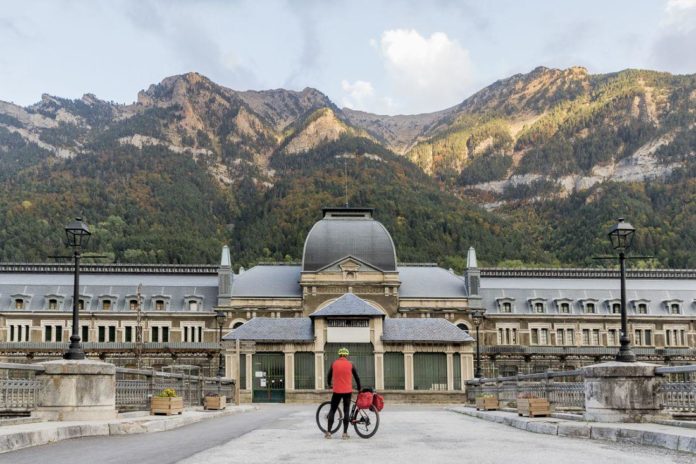 Sometimes they catch our attention when we pass by them, others aspire to be fully integrated into the environment to be part of it … the architecture that has been developed in recent years in Aragon brings together buildings of all kinds, many of them internationally recognized and awarded. We delve into the most recognized architecture of Aragon, at least the contemporary one.

Between June 28 and September 1, the XV Spanish Biennial of Architecture and Urbanism, an event that recognizes the best projects between 2018 and 2020, is being held between Barcelona and Valladolid. An Aragonese work has been selected by the jury as a finalist among the nearly 600 proposals submitted. It is the auditorium of Illueca.

It is a space, the work of Magén Arquitectos, which integrates perfectly into the town, thanks to its structure divided into four spaces, each with its own roof, and the use of reddish brick, which blends in with the rest of the buildings in the town. In this way it manages to stand out without being strident.

This is not the first recognition that an architectural work designed or erected in Aragon has received, so, taking advantage of the occasion, we have gathered some of the most emblematic or recognizable works that have been built in Aragon in recent years.

Among the most recognized architecture of Aragon, if we talk about buildings that are not used as housing, we could start with the Zaragoza Bridge Pavilion, designed by Zaha Hadid, one of the symbols of Expo 2008 and that, together with the Water Tower (by Enrique de Teresa and Francisco Romero), have redefined the landscape of the Aragonese capital. The Bridge Pavilion served as an exhibition hall during the Expo, now it is the headquarters of the Mobility City project. And without leaving the city we can walk to the Central Market, which in February 2020 premiered a reform that updated the look of this jewel of modernism of the early twentieth century. The space for the stalls grew and the interior was opened to the city, thanks to glass enclosures that allow you to see from the outside what is happening inside. A modernization that goes beyond the facelift for one of the most famous buildings of the Aragonese capital.

In Huesca, we cannot fail to mention the rehabilitation of the Canfranc station and its surroundings. The facade, volume and atrium of the original building were respected, and the interior was adapted for new uses; in fact, it will reopen as a hotel. Energy efficiency criteria were also applied and the thermal and acoustic insulation has been improved. The refurbishment of this building, inaugurated in 1928, an emblem of Aragon’s architectural heritage, was carried out by Ingennus (as was the refurbishment of the Central Market, in that case with Baika) and also includes the new station, which came into service in April this year, and a reception and information center for the Pilgrims’ Route to Santiago de Compostela in Aragon.

On the opposite side of the Canfranc station refurbishment, which respects the lines of the original building, we find the refurbishment of the IAACC Pablo Serrano, in Zaragoza, whose latest extension, inaugurated in March 2011, aimed to bring the construction in line with the interior, a museum dedicated to contemporary art. That is why the characteristic upper platforms were erected which, together with the large window, give shape to this great architectural attraction located in the center of Zaragoza. The renovation of the IAACC was the work of José Manuel Pérez Latorre.

The work for private housing has also left in our community emblematic buildings, which, in addition to being a place of residence, also serve as an architectural attraction. And we want to start with one that arises in response to a challenge, that of integrating buildings in the nature of Matarraña. We are talking, of course, about the Solo Houses. It is an initiative of two artists who challenged 10 studios from around the world to reimagine the concept of the second home, and to do so in this area of Teruel. Two of these proposals are already habitable, and can be rented for tourist use. The most emblematic is the Solo Office KGDVS house, a ring-shaped building of 1,600 square meters distributed in a circle whose windows offer a 360-degree view of the Matarraña, one of the most beautiful villages of Teruel and Spain. A building-work of art that also has more than 1,000 square meters of courtyard.

We return to Zaragoza, although this time we are not going to talk about buildings that extend horizontally, but vertically. Because it seems that, precisely with the arrival of the Water Tower in 2008, more and more residential buildings are daring to challenge its height. In this sense, the area around the Delicias station has become an emerging area in terms of architecture, because future towers that will eventually form the skyline of the city are planned there. The tallest, at least so far, is Torre Zaragoza, which is being built on Avenida de Navarra, with a height of 30 floors. This construction by the Zaragoza firm Ingennus is inspired by those that can be seen in New York. It is still under construction, but its imposing figure already reigns next to the station.

Another example can be found in Plaza de Europa, where the Skyline building by Clúa y Mangado, whose name makes clear its aspirations to become a new architectural icon of the city, is about to be completed.

Modern proposals, renovations that respect the spirit of historic buildings, towers that rise dozens of stories above the ground… as you can see, recent Aragonese architecture is full of iconic buildings whose number will surely continue to increase in the coming years.