The river wealth of Aragon makes it an environment of water resources for various purposes. Discover the opportunities offered by its rivers while maintaining biodiversity and nature. 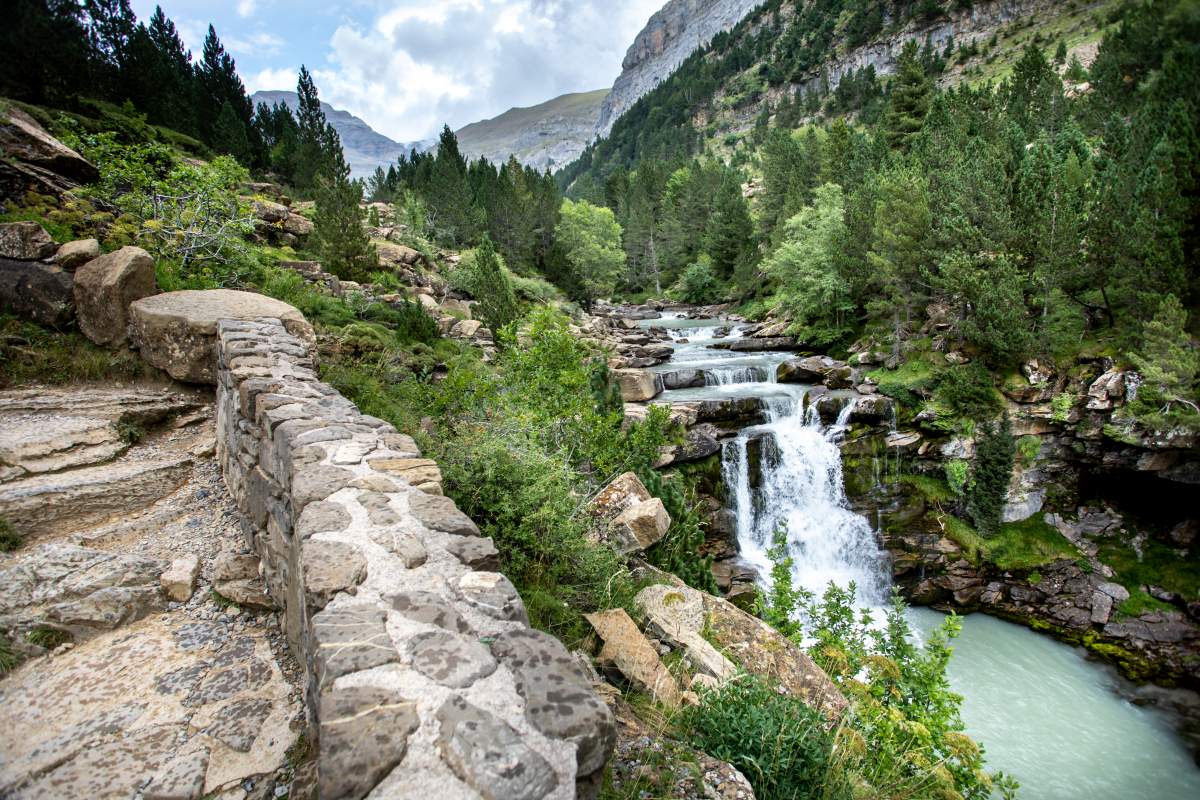 In Aragon, there are many rivers and towns with rivers that offer activities to do while raising awareness among citizens for the care and protection of them. Among them, the practice of risk sports stands out, which annually attracts enthusiasts from all over the world. There are many different types of sports available in Aragon, from rafting, bungee jumping and rappelling to canoeing and fishing.

Aragon is the area of the world where there are more dams and reservoirs in proportion to its extension, which translates into a huge potential and several possibilities for freshwater fishing. The Government of Aragon, in collaboration with the Aragonese Fishing and Casting Federation (FAPYC), has created the “Fishing in Aragon” brand, through which it intends to project the Aragonese seal around the world. 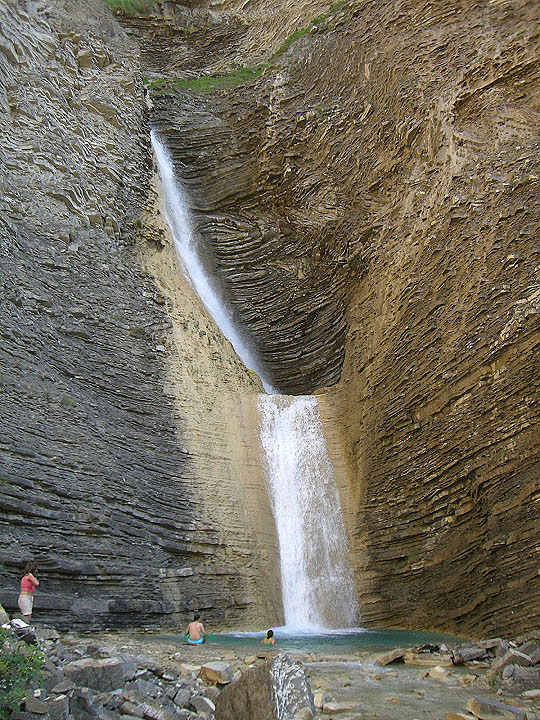 Mountain river of the Aragonese Pyrenees par excellence, it is an important receiving center for nature and sports lovers.

For those who enjoy extreme sports, the bridge of Murillo de Gállego is an ideal place for bungee jumping at a height of 25 meters. Also, the Os Lucas ravine is a beautiful descent located in the heart of the Tena Valley, characterized by its crystal clear water and its adherent rock full of folds. For the most intrepid, it has two jumps at 10 and 6 meters high, as well as 2 rappels, the first impressive vertical of 30m and the second of 12m.

The Ribagorza region treasures the pre-Pyrenean jewel that links Aragon with Catalonia. Inaugurated in 2013, this route connects the lands of Huesca and Lleida by crossing the river Noguera Ribargozana in the vicinity of the gorge or Congost de Mont-rebei. It is a route characterized by vertiginous paths carved into the rock, wooden walkways attached to the rock, airy metal bridges and calm turquoise blue waters that are a point and apart in the Aragonese hiking.

This amazing place offers the opportunity to perform other types of activities for families and friends, and reserves a space for the more adventurous. Therefore, another way to admire the landscape and enjoy its turquoise blue waters is to rent kayaks from the Montfalcó lodge. And for the bravest climbers, the gorge known as the Cathedral of the Big Wall is one of the best places in the state for the practice of this discipline. 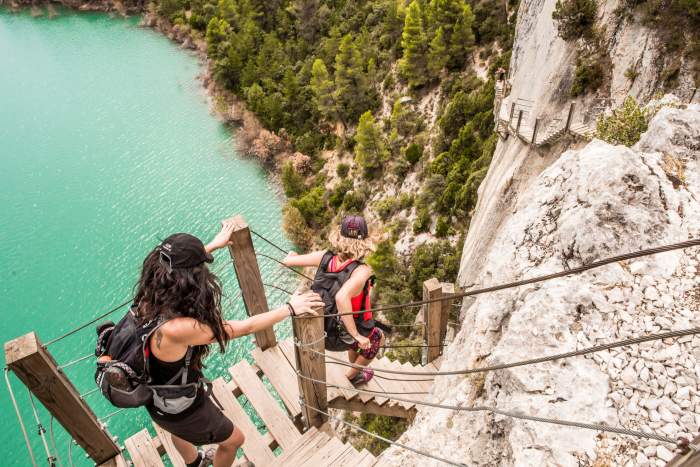 This river runs through the Pineta Valley, one of the four ravines that make up the Ordesa and Monte Perdido National Park. In the Sobrarbe region and located between Ainsa and Laspuña, the Cinca River offers an unforgettable environment to feel the adrenaline. Practice rafting, the sport of risk par excellence. Descend the white waters of the Cinca in teams on a pneumatic raft propelled by oars. The range of sports offered by this river course for both beginners and veterans is very wide.

The Ara river is also a place to enjoy a good swim in places like the gorga of Boltaña.

This reservoir built on the course of the Ebro River is the largest river confluence in the Iberian Peninsula. It was created by the construction of the Mequinenza and Caspe reservoirs in 1965 and gave rise to more than 500 kilometers of inland coastline. The Sea of Aragon constitutes a privileged scenario for the practice of nautical sports and is a place of reference for fishermen from all over Europe.

The Aragon Sea enjoys a great biological importance in its waters, making it an idyllic place to fish. Salmonids, predators or cyprinids are some of the most common species in this area. In addition, Aragon is different from other European natural sites because almost all the bodies of fishable water are public, so fishing here is free.

The region of the same name through which this river runs offers one of the most beautiful excursions in Aragon in the area of El Parrizal, which is accessed from the town of Beceite. You can not leave this place without undertaking the route of the footbridges of El Parrizal.

After 800 meters of walk where you can contemplate the cave paintings of the Fenellassa (3,500 BC), declared World Heritage Site, the river itinerary opens. In this section, walking on crystal clear water is possible. The walk along wooden walkways makes the environment a more idyllic place to breathe tranquility and nature. After walking for an hour, the Estrechos del Parrisal, a canyon of about 200 m long, whose vertical walls are approximately 60 m high and which serves as the culmination of the adventure, looms over us. 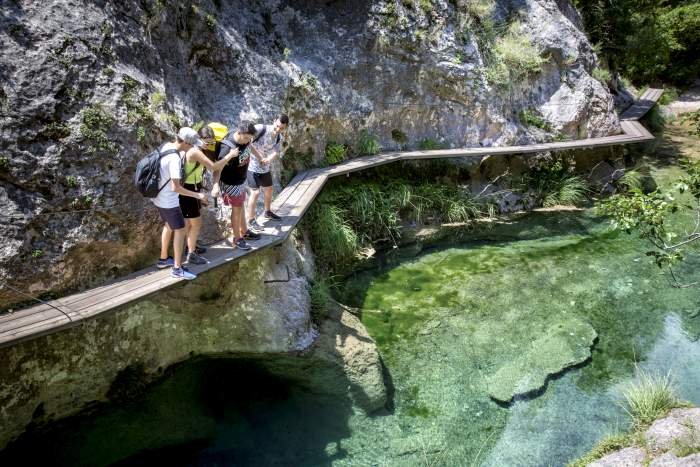 The source of the longest river in the Iberian Peninsula is in the Sierra de Albarracín, in the province of Teruel. Its course emerges at 1600 meters of altitude to cross 1000 km of Spain and Portugal until its mouth in the dressing room of the sea of the Straw, in Lisbon. Near the town of Frías de Albarracín, the monument you will find there is intended to pay tribute to the three provinces in which it is forged. The emblematic “little bull” symbolizes Teruel, the “star and the chalice” represent Cuenca and the “knight” represents Guadalajara.

From this reference point, you can start highly recommended hiking routes. The most remarkable are the GR10.1. route and the walk along the roads in the Montes Universales. Immerse yourself in an atmosphere of nature, pine trees and lonely roads. Enjoy the tranquility that emanates from the vicinity of the source of the Tagus River.

Enjoy the best spas in Aragon.

Get to know the most spectacular bathing areas of Aragon.

The 20 best things to see and to do in Aragon

Gloria Pérez: “You have to know the territory to be able to defend it”

The 10 best restaurants in Zaragoza according to TripAdvisor