The restaurant opened a year ago in the Aragonese capital and has a year-long waiting list. It has become one of the gastronomic sensations in Aragon. We learn about the project, based on sustainability, zero kilometer products and care for the diner. 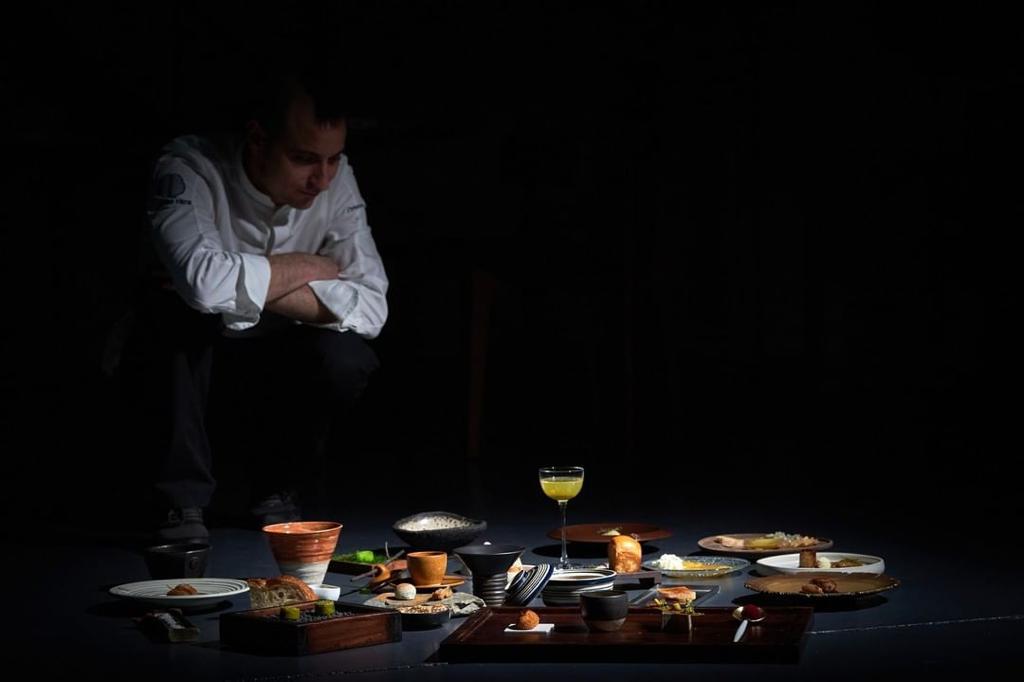 It already has a one-year waiting list and if you try to make a reservation right now you won’t be able to do so until the end of the year 2022. It is perhaps right now the restaurant with the longest wait in the whole country, and it has become one of the gastronomic surprises of Aragon in just one year of life. Gente Rara, which already has a Sol Repsol to its credit, opened its doors in the middle of the pandemic, on October 10, 2020, and has wanted to give value to Aragonese gastronomy and visibility to the city of Zaragoza through an innovative and sustainable cuisine, which pampers the product and local producers, which takes into account the space, the kitchen and each piece of equipment, and which gives the opportunity to eat haute cuisine at affordable prices.

Gente Rara is the project of Cristian Palacio and Sofía Sanz, chef and head waiter respectively. Both are Aragonese and met in the restaurant of the Panticosa spa, while they were soaking up the knowledge of Pedro Subijana. Afterwards, they passed through Mallorca in the kitchen of Luis Aznar and the Monasterio de Tórtoles de Esgueva Restaurant, until they arrived at the Bodega de Barahonda restaurant in Yecla (Murcia) where they spent eight years. There, is where they consolidated a way of cooking that earned them Repsol sun since 2015 and numerous awards. But the time came when every emigrant considers returning. “The land always calls, we had been away for 15 years. We have a little girl and our main intention was to return here, to Zaragoza,” says Cristian Palacio. 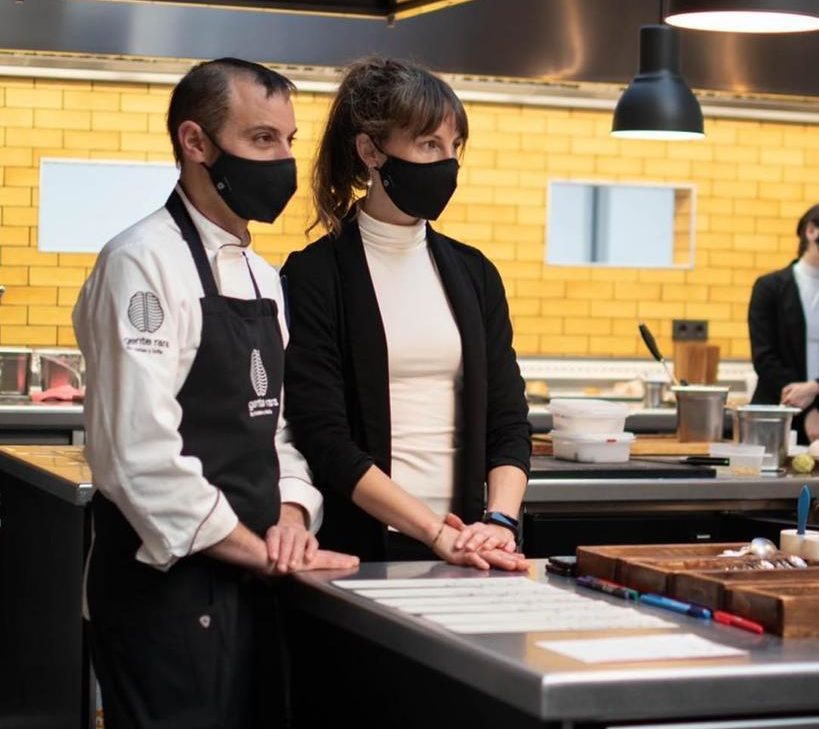 In this way, in 2019 they assessed different options, among which the one that stood out was to return with their own project that they took forward “with their minimum resources”. “We decided to create Gente Rara from scratch. It was a pretty weird concept, very different and something quite adventurous in the middle of a pandemic but it seemed like it could turn out well. We wanted to do something that would excite us,” Palacio recounts, recalling how the project came about.

Cristian and Sofía wanted to break the molds of what a diner has in his head when he attends a restaurant. “Our main difference is to show a kitchen in the center of the dining room, with total sincerity, and to promote the room service that has been lost over the years, we have been forgetting the names of the wait staff,” explains Cristian. Thus, the role of Félix Artigas, sommelier of Gente Rara; Jessica Rodrigo, bar tender and in charge of the cocktail bar; or Sofía Sanz herself, head waitress and responsible for the cheese cart that delights diners every day with more than 35 references. “The cheese cart is a pre-dessert, very French style, with varieties of cheeses from here in Aragon but also from the rest of the world. All of them have a peculiarity: they are from small family farms,” he says. 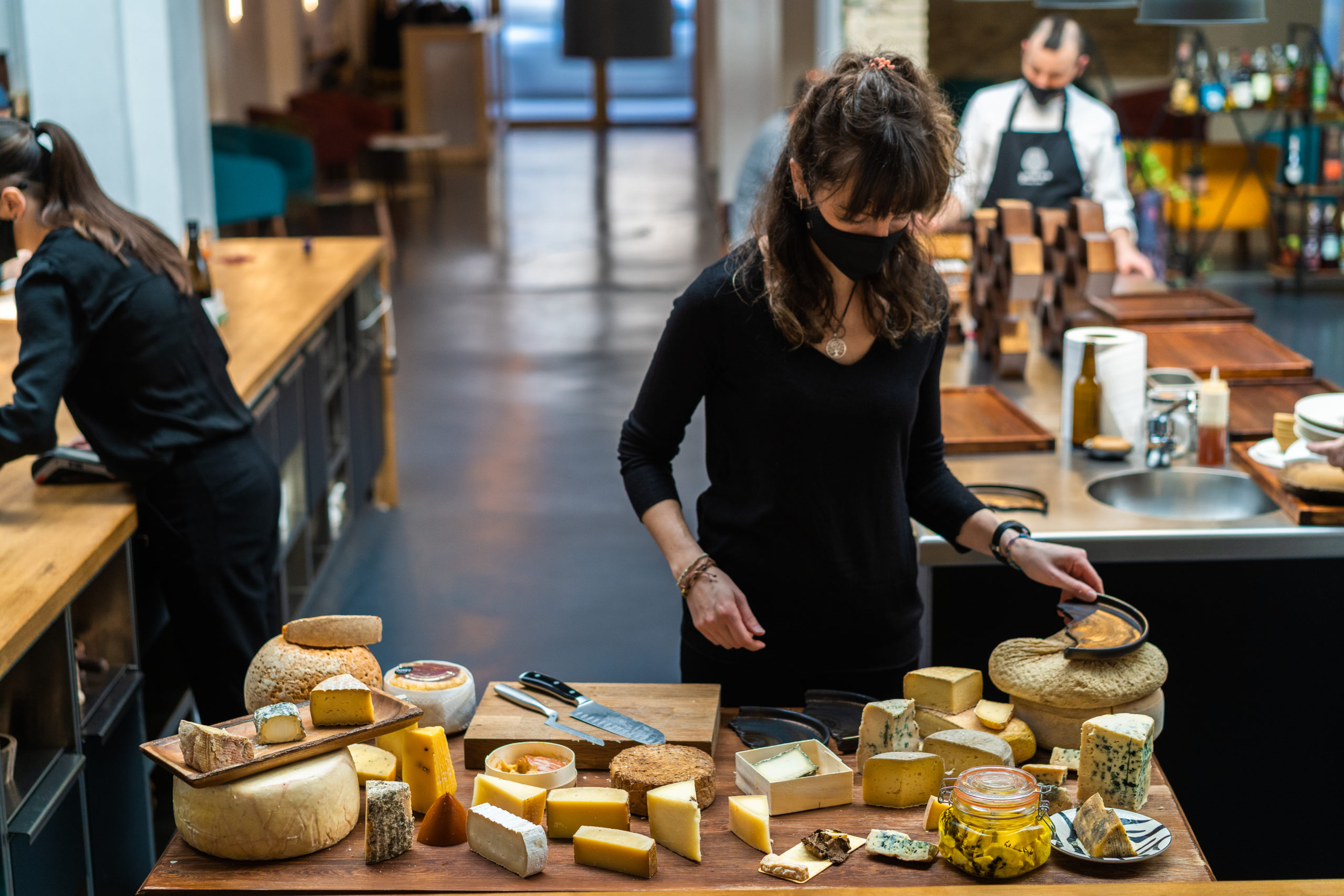 Precisely the importance of craftsmanship when choosing the products used in Gente Rara is one of the fundamental elements of their project. “We want to nourish ourselves from small producers, artisans and creatives. For us, kilometer zero is very important,” Cristian points out. At Gente Rara, the tableware is made by artisans from Aragón (Sehahechotrizas), the specialty coffee comes from a roastery in Zaragoza (Onawa), the bread is from Masa madre and the honey for the different elaborations comes from Ariza, from Lares Miel.

Also noteworthy are the zero kilometer beers, such as some references of Ambar or the artisanal Cierzo. Ambar chose the restaurant to present its latest beer, Ambar Trufada, in which it has worked with truffle researchers from CITA to integrate the truffle aromas without killing the beer. Gente Rara adapted its tasting menu for the presentation. “We don’t want to dedicate ourselves in general to events, but we do want to bet on local research and on what Aragonese food is present in. We are committed to everything that adds up and is good for our region,” Cristian explains.

In addition to beer, Gente Rara has more than 300 wine references from all over the world. 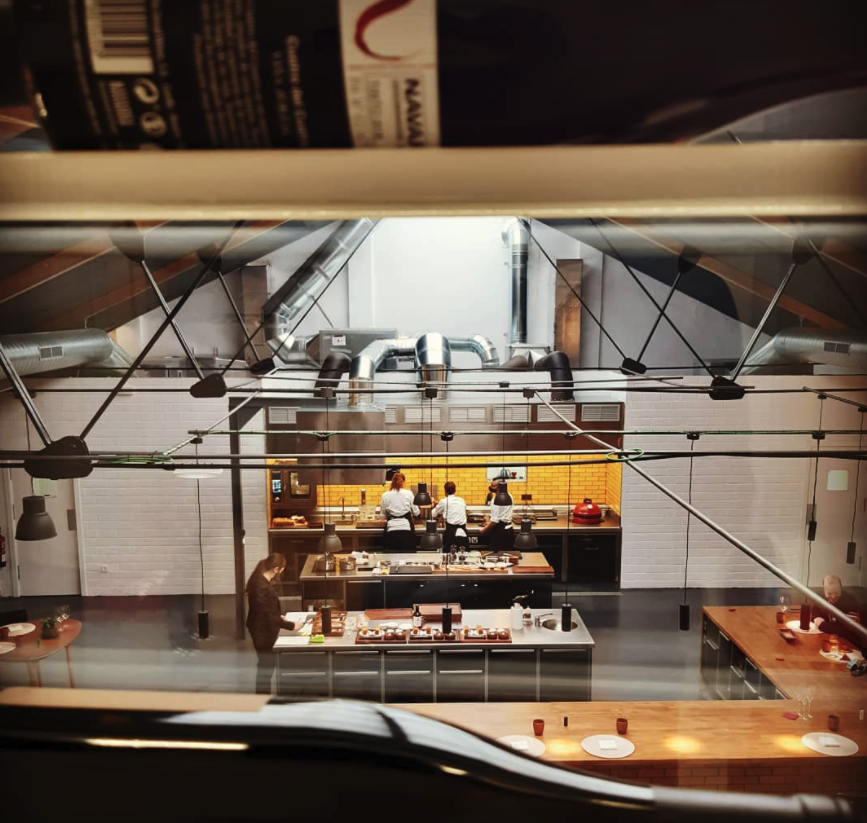 Gente Rara’s cuisine is influenced by Pedro Subijana and Cristian’s own way of being, although he recognizes that “social networks and the internet make it increasingly possible to receive inspiration from places you haven’t been to”. The concept, as defined by the chef, is “Aragonese Nordic, with the idea that everything is more natural, taking away from the dishes what is left over, simplifying techniques and products”.

There are three menus that can be tasted at Gente Rara: Demente (35 euros), Chalado (45 euros) and Lunático (75 euros), the latter being the most complete with 25 courses. “The Lunático menu is usually the most chosen, as there is such a long waiting list that when people come they try everything because they don’t know when they will be able to come back.” 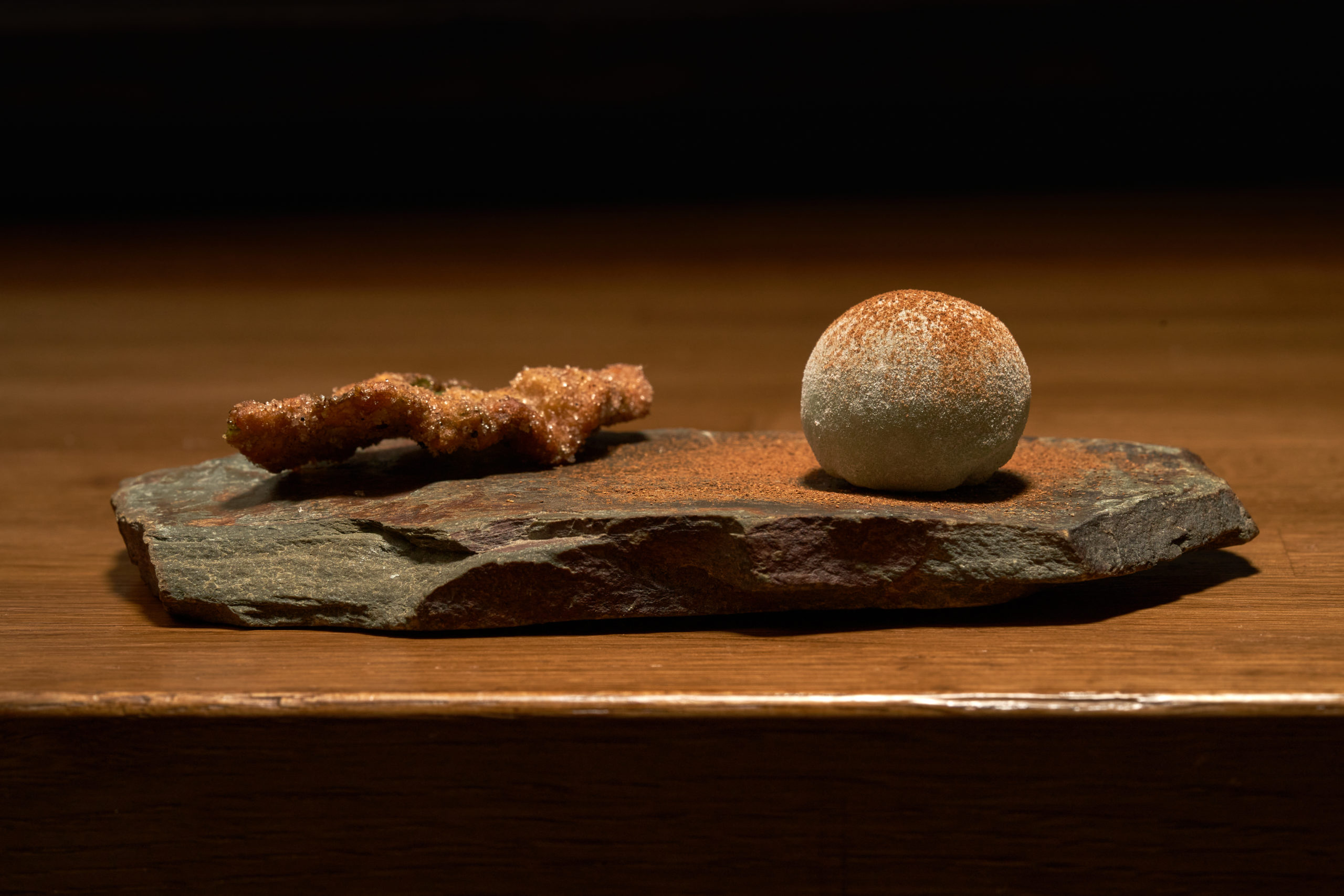 And it’s true, because Lunático is their best showcase. “It is where we show our greatest work force, the most powerful techniques, the strongest products. We have played a lot with the avant-garde and the tradition here in Aragon,” says Cristian. In his menu you can find recovered traditional products such as borage crespillos that are combined with traditional Japanese products such as mochi; or discarded products, such as lamb tail or lamb brains. “We wondered what they did with them in other restaurants and we wanted to use what they don’t use, since we are committed to sustainability and making the most of the animal,” he says. 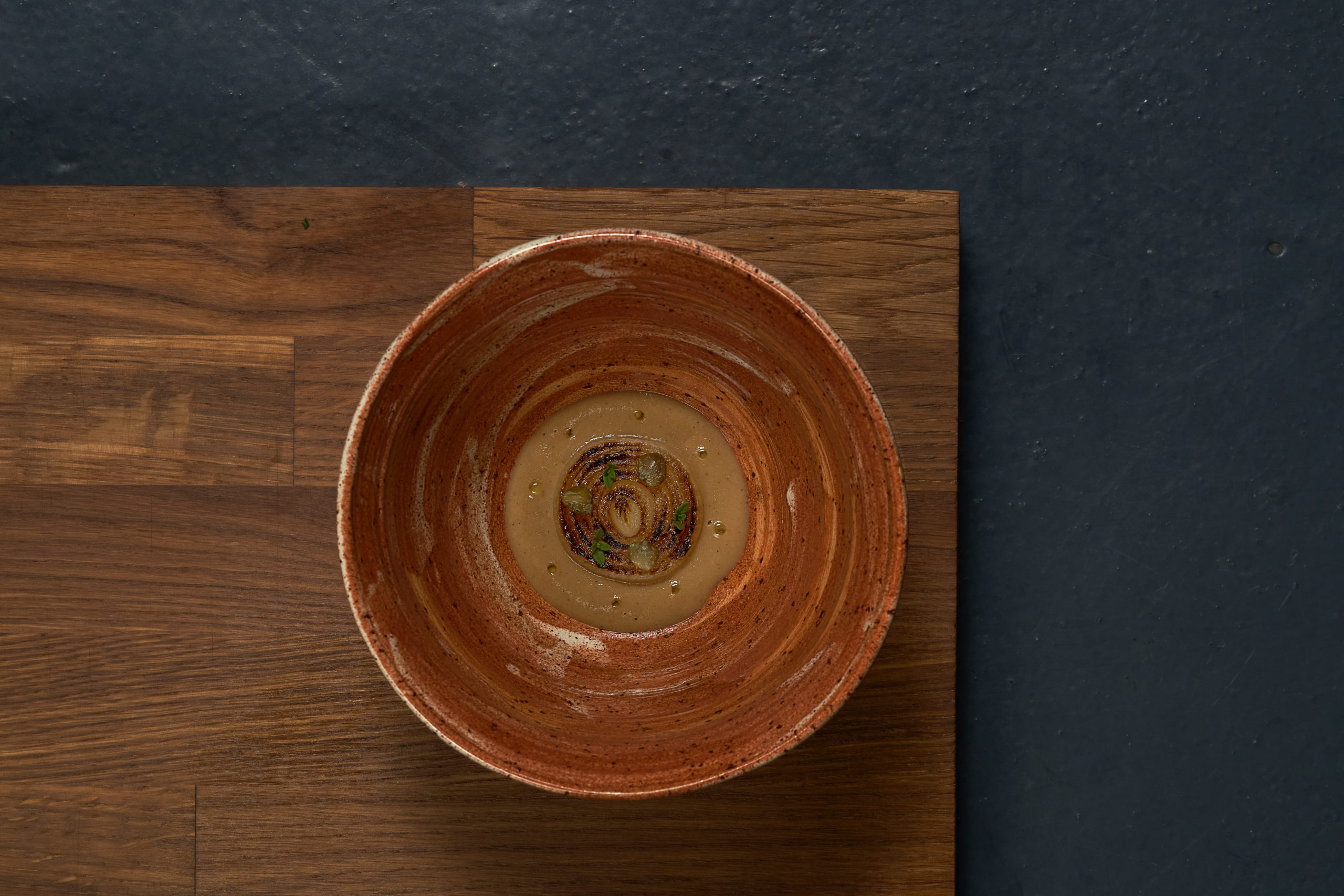 Of course, you can not miss the vegetables and seasonal vegetables such as onion Fuentes de Ebro, chard; in meats Graus sausage, black pudding; and others such as nuts from Gurrea de Gallego, Cristian’s village. But they go further, because they have wanted to achieve maximum sustainability in their menu and look for products in Aragon that do not seem to belong to this land, as is the case of the foie they get in Teruel. “I have very little difficulty finding foie in France, but we find it absurd to transport it 2,000 kilometers when it is only 200 kilometers away,” argues the chef of Gente Rara. 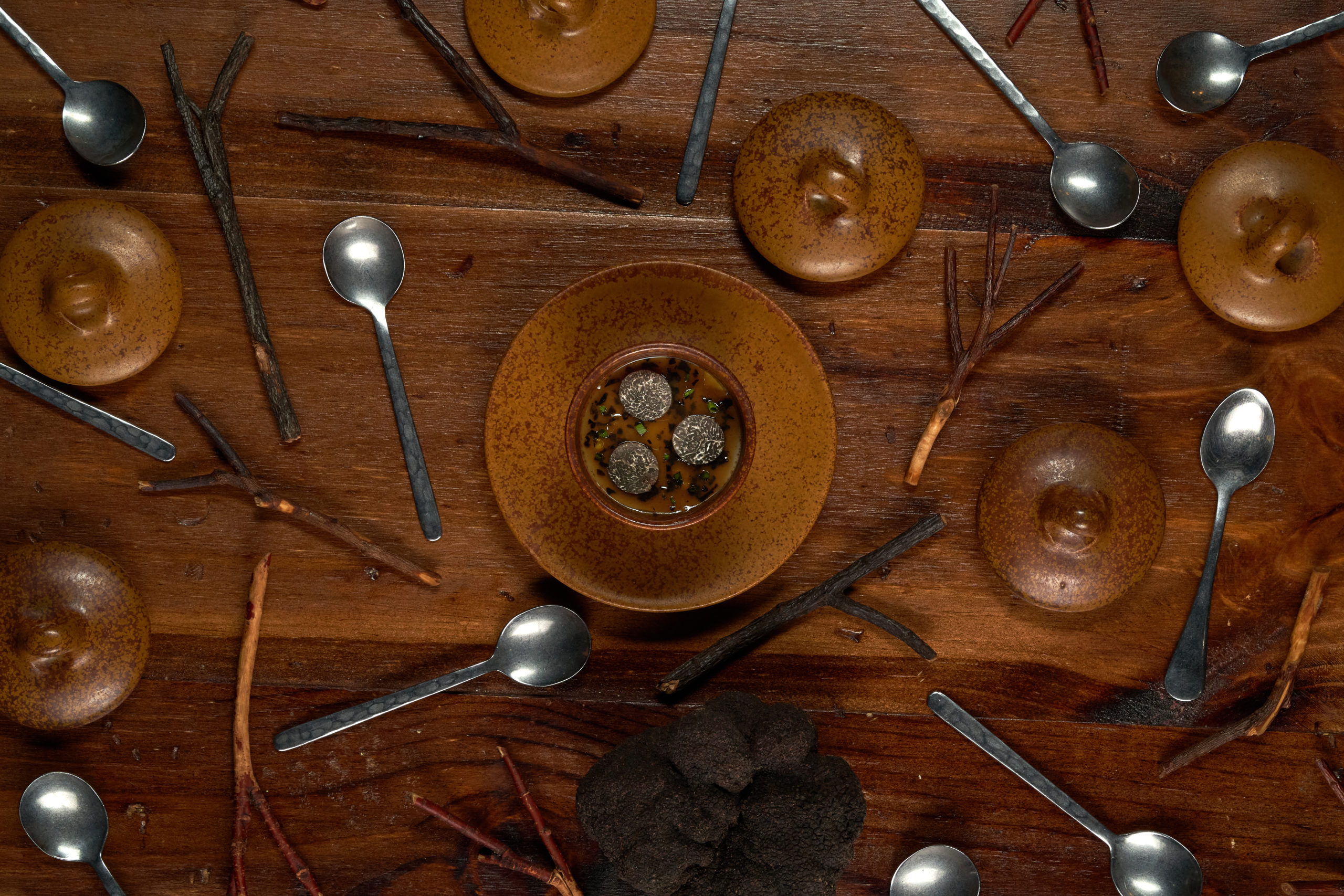 The seasonal products that shape and mold the menu throughout the year, such as the Teruel truffle, the tear pea or the white asparagus.

Getting out of the comfort zone

For the moment, Sofia and Cristian are looking to consolidate the restaurant, evolve and learn how to do their job. Many customers expected the restaurant, which already has a Sol Repsol, to become a Michelin Star restaurant this year, but they didn’t count on it. “With such a short time open to the public it wasn’t something we were opting for. The simple fact that customers or the public feel that we deserve it is fantastic, but our objectives do not include achieving the Michelin Star, that is a consequence of a job well done. It is not a convenient objective”, comments Cristian. 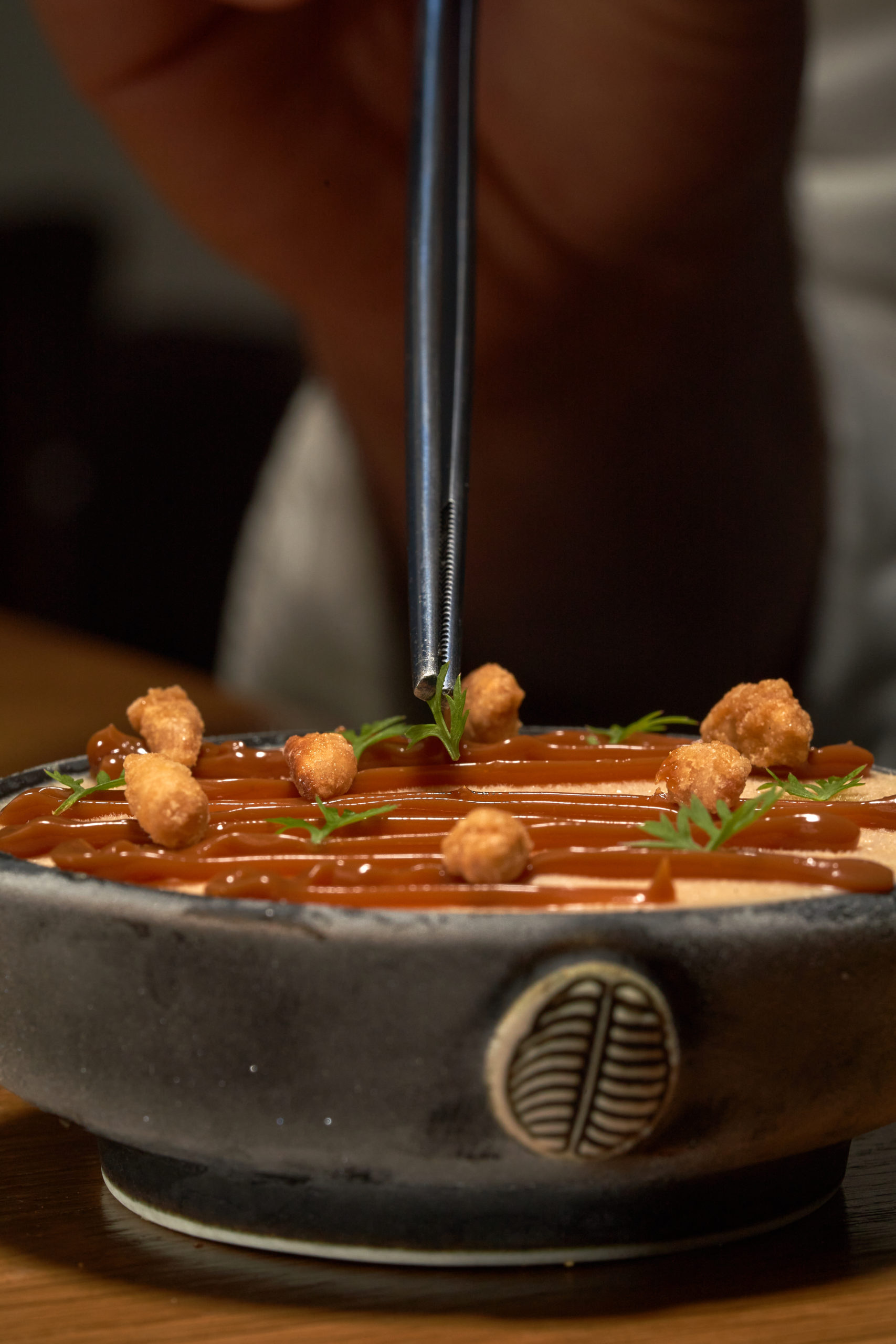 For the owners of Gente Rara, stepping out of their comfort zone is one of the most important parts of their job. “It’s something that strengthens the creative side and pushes us to push ourselves a little more. We don’t know when or how we’ll get out of our comfort zone, but we know we will, it’s just beginning and we have to see what we’re capable of doing.”

Among his goals for the future, Cristian recalls that he wants to make Zaragoza known outside of Aragon and “join other chefs like Diego and Ramcés of Cancook; David Boldova of Novodabo, Marisa Barberán of La Prensa, or Alex Vina Viñal of Nola Gras”. The chef defends the quality of Zaragoza’s restaurants, “some of which are internationally recognized”, but stresses that “we have not been able to publicize everything that chefs do in Zaragoza, or at least not as it was the case in Huesca. He asks for the support of institutions and encourages them to “make efforts through gastronomic fairs in the city, support to go to Madrid Fusion and also through actions related to tourism” to make visible what Zaragoza and its chefs have done in recent years.

Discover a selection of the best restaurants in the province of Zaragoza.

International artists such as Rufus Wainwrigth, Wilco, Cat Power, Fatoumata Diawara, Adriana Calcanhotto will perform in May – June in Zaragoza